The Case for Cutting Adam Thielen 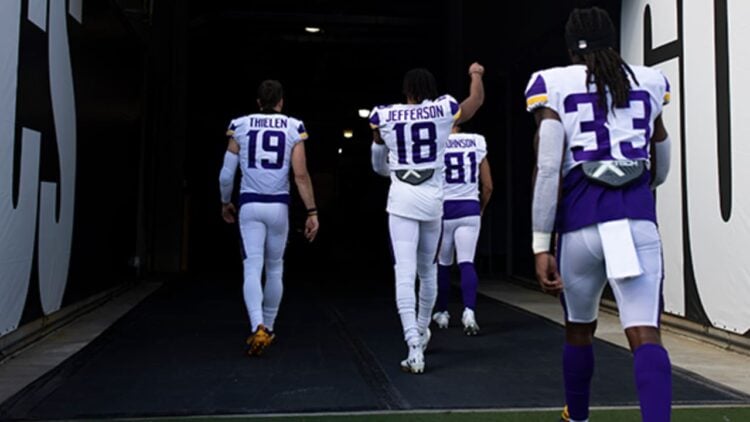 People will hate this idea, and yet it’s one the Vikings need to be asking themselves. One imagines that the current GM interviews include plenty of discussion surrounding the salary cap plan. It’s been something I’ve focused on since the before the season ended, publishing pieces looking at specific contracts (such as Conklin, Cook, and Peterson) and then the more large scale questions (such as the impending 2022 crunch and void years). Now, it’s time to lay out the case for cutting Adam Thielen.

I’m a fan of Thielen. If we had 53 players like him, we’d be contending for a Super Bowl. He’s a resilient, hard-working, highly-skilled, competitive football player. Every single team in the league wants players like Thielen.

Well, the long and short of it is that difficult decisions need to be made. There’s a reason why he was recently included in the cut one, extend one, trade one exercise. Read it for yourself; Thielen was the one who got cut in this scenario.

The 31-year-old has been in the league for 8 seasons. The last time he played every game was in 2018. The past three years have involved him missing time for different injuries. During this timeframe, he has failed to clear 1000 yards receiving in a single season. Admittedly, that’s a somewhat subjective benchmark. One can put forth 999 yards or less and still be very effective in their role. Therein lies the key, though: what’s his role moving forward?

It’s impossible to say with a new coach yet to be hired. Someone who runs a lot of 11 personnel may want him more than someone who is looking for a lot of 13 personnel.

Of course, we wouldn’t be having this discussion if there wasn’t a financial component. His $16.945 million cap hit takes up 8.1% of next season’s cap, per ol’ faithful (a.k.a. Over the Cap). It’s safe to say that the offense isn’t the same without him. Is that enough to keep him around at that price tag? Probably not.

Cutting Adam Thielen means just over $11 million in dead money and a little under $6 million in extra room. However, a post-June 1 designation means $12.645 million in cap space since it spreads Thielen’s remaining dead money over several years. It’s short-term gain in exchange for long-term pain. For a Vikings team looking to reload rather rebuild, that may be an enticing option.

The final factor to keep in mind is that Minnesota does a great job of drafting and developing wide receivers. Obviously, most people will read that sentence and think of Justin Jefferson, which makes sense. Keep in mind, though, that before Jefferson it was Stefon Diggs. Before Diggs, it was Thielen as an UDFA. Plus, K.J. Osborn showed major growth in his sophomore season. One wonders if Ihmir Smith-Marsette will show a similar progression following his strong finish to the year.

In other words, there’s plenty of reason to believe that the team could get solid production for a considerably smaller price.

For the record, I think that outright cutting Adam Thielen is a bad idea. My first instinct is to work with him on a restructured deal, but it’s likely far more complicated than I’m making it seem. Regardless, the team shouldn’t be willy-nilly in their approach.

Though older, Thielen is still a highly-effective receiver. He has 14 TDs and 10 TDs over these past two seasons. His ability to find openings – and make contested catches – in the red zone is remarkable. That’s where being so competitive and so precise in his routes really makes the difference.

At the end of the year, Thielen was PFF‘s 34th best receiver. Not bad for someone who was sometimes overlooked in the game plan and who battled injuries. Moreover, he was the 6th-best receiver in 2020. It’ll be completely unsurprising if he returns to elite-level play in 2022. For this reason, Minnesota’s new leadership would be wise to think long and hard before opting to cut Mr. Thielen.