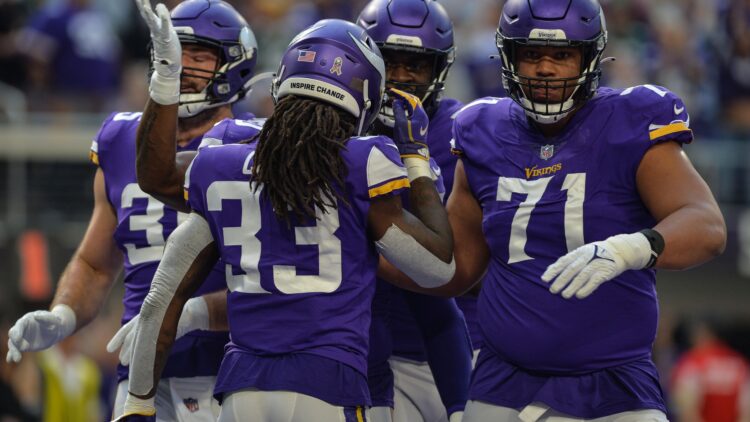 The following questions are about current Minnesota Vikings topics, answered by PurplePTSD. Today is the September 10th edition, addressed in a from-the-hip fashion. If you have questions, please email them to DustinBakerNFL@gmail.com.

A: Give us Christian Darrisaw.

Darrisaw authored a rather good rookie campaign when he actually got on the field, and it seems his summer has only heightened the hype. It would be wonderful for a Vikings offensive lineman to nail down the left tackle spot for the first time since Bryant McKinnie. Darrisaw feels like the guy to do it.

Plus, all summer, Vikings coaches have likened Darrisaw to Trent Williams. They probably wouldn’t do that without merit.

Q: Will Myles Dorn get the nod on Sunday over Lewis Cine?

A: Well, the Vikings called Dorn up from the practice squad, a pretty good indicator he’ll get the nod.

Cine really doesn’t “need” to play in Week 1, as Harrison Smith and Camryn Bynum are the starters. If he’s healthy — great. But there is no reason to rush Cine, who is the plan for life-after-Harrison-Smith.

It’s probably safe to assume Dorn will see action against the Packers, likely on special teams. Cine is truly questionable.

Q: Which NFL game are you most excited to watch aside from Vikings-Packers?

A: It has to be Eagles-Lions, right?

Of course, that’s not the most exciting game, but it’s comprised of the Viking two opponents in Weeks 2 and 3. Minnesota travels to Philadelphia for Monday Night Football in nine days, then darts home for the Lions six days later.

If the Eagles are as good as some pundits forecast, they should thump the Lions. Conversely, if all the smoke around Detroit and Hard Knocks is accurate, the game should be competitive.

For Vikings fans, Eagles-Lions should generate the utmost interest.