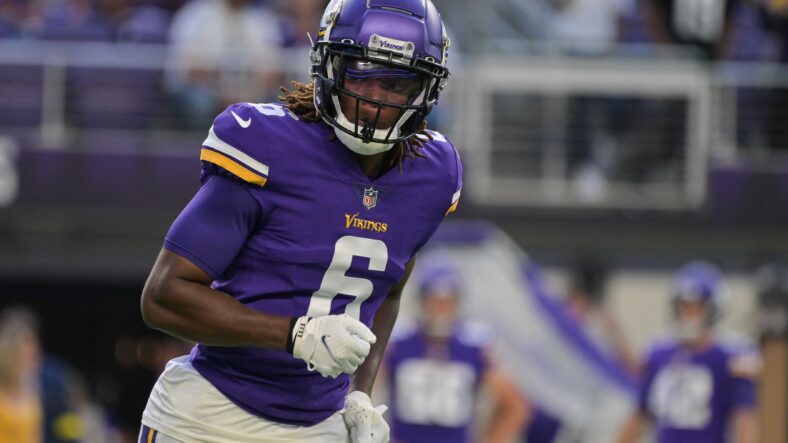 The following questions are about current Minnesota Vikings topics, answered by PurplePTSD. Today is the October 5th edition, addressed in a from-the-hip fashion. If you have questions, please email them to DustinBakerNFL@gmail.com.

Q: When is the soonest you expect Lewis Cine back for the Vikings, if at all?

Cine’s leg injury was brutal for anybody but especially for a rookie player. Yet, the Georgia alumnus was in good spirits on Wednesday — it was his birthday — as he videoconferenced with teammates who sang him Happy Birthday.

But the major takeaway for Cine and the Vikings is that his injury is not career-ending.

Q: How many of the former Vikings now on the Bears roster will actually play on Sunday?

A: Great question. The Bears have nine former Vikings players as of October 5th. This is the entire group, and those who should play in Week 5 for Chicago are highlighted in red:

Dozier is on injured reserve. Gates, Hand, and Holmes are practice squaders. And Siemian will only see the field if QB1 Justin Fields is injured or benched.

Q: Who’s been the best player on the Vikings through four weeks besides Justin Jefferson?

A: Beyond the shadow of a doubt, it’s Dalvin Tomlinson.

Tomlinson, an expensive defensive tackle, is earning his keep. His 80.5 Pro Football Focus grade leads all Vikings players through Week 4. And he’s arguably the only Vikings player who hasn’t yet had a bad or blah game.

Now, the rest of the Vikings defense must follow Tomlinson’s lead, and the team will be in good shape.

Runners up to Tomlinson would be Christian Darrisaw, Za’Darius Smith, and Brian O’Neill.