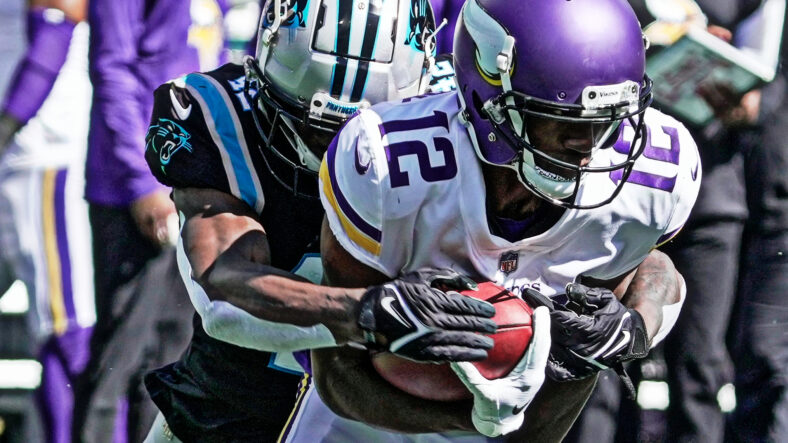 The following questions are about current Minnesota Vikings topics, answered by PurplePTSD. Today is the May 31st edition, addressed in a from-the-hip fashion. If you have questions, please email them to DustinBakerNFL@gmail.com.

Q: What is your opinion of the Vikings potentially re-signing Dede Westbrook after he worked out for the team on Tuesday?

A: It certainly isn’t as “exciting” as last summer when the team desperately needed a WR3.

Minnesota now has K.J. Osborn and Ihmir Smith-Marsette for WR3 and WR4 duty, so a possible Westbrook acquisition this time should be perceived as what folks should’ve realized, in retrospect, last year — bringing Westbrook aboard would be a special teams move.

Westbrook ranked 11th in the NFL last year per punt return yardage. He was safe. For Vikings doings, sometimes safe is smart.

Q: With Akiem Hicks heading to the Buccaneers, who can the Vikings still target for defensive tackles?

A: Yes, Hicks was whispered in Vikings chats for about 2.5 months.

With Hicks off the board — and if the Vikings even want more DT help — Kwesi Adofo-Mensah could kick tires on Ndamukong Suh, Sheldon Richardson, or Star Lotulelei.

The Vikings may be perfectly content with the current group of Dalvin Tomlinson, Armon Watts, and Harrison Phillips. Jaylen Twyman and rookie Esezi Otomewo are the reservist players.

Q: Is Johnny Mundt really the TE2 plan or even the TE1 plan if Irv Smith gets hurt?

If the Vikings didn’t like Mundt for TE2, they would’ve signed Eric Ebron or Jimmy Graham by now. Mundt comes over from Kevin O’Connell’s Rams. There must be something quasi-special about him.

And remember, too, if Smith Jr. got hurt again, Adofo-Mensah would probably quickly be on the horn with an Ebron or Graham.

You just have to hope he doesn’t fire off a trade with the New York Jets.

And, who knows? Have you considered Mundt might be a good football player?