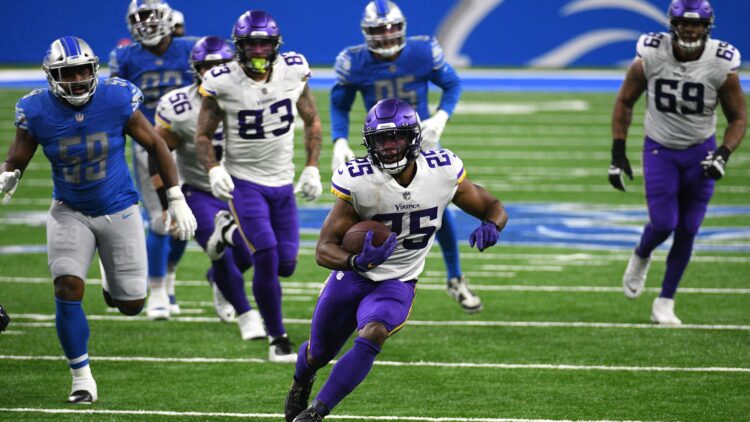 The Vikings have a ton of talent in their RB room.

Dalvin Cook had a down 2021 season, and yet there seems to be quite a bit of optimism surrounding the veteran back. Alexander Mattison – despite having some naysayers – is a good player. Minnesota partners those top two with the unbelievably fast Kene Nwangwu and recent draft pick Ty Chandler.

Making things even more crowded is Bryant Koback, who was brought in to compete at RB. C.J. Ham and Jake Bargas, moreover, are fighting for a fullback spot. As you can see, there will need to be some difficult decisions to make it work.

One wonders if all the talent at RB will prompt Kevin O’Connell to get creative within the Vikings offense. Will a couple RBs get on the field at the same time? Will we see the RBs more involved in the passing game? Can we expect to see them lined up in the slot more? Are there ways that screens can be more dangerous?

Cook, Mattison, and likely Nwangwu are near locks for this team. Cook will be the RB1 and Mattison will likely resume his RB2 duties. Perhaps Nwangwu could find a role on third downs, showing off his wheels by becoming a pass catching threat.

Kirk Cousins, like most quarterbacks, benefits from a strong running game. Having explosive backs who can not only pick up large gains but also the necessary yardage to set up manageable situations on third down is important.

Kevin O’Connell may look to make Cook more of a passing threat. Last season, Cook’s passing score on PFF was an uninspiring 51.6. Previously, Cook has had stronger scores in this area (62.1 in 2020, 66.4 in 2019). The PFF numbers aren’t particularly inspiring, and yet every offensive coordinator wants to get their best playmakers in space. The last time the Vikings made the playoffs was in 2019 when Kevin Stefanski was OC. Cook demanded 63 targets and had 53 catches for 519 yards. Obviously, the team’s success goes beyond just Cook getting more looks as a pass catcher, but it’s notable.

Plus, Mattison is a more than capable pass catcher. His PFF grade in this area – 61.3 – was a fair bit stronger than Cook’s. Mattison had less targets in 2021, but only trailed Cook by two receptions and actually picked up for receiving yards. In other words, Minnesota’s RB2 did more with less as a pass catcher.

Bargas will push Ham, but the veteran fullback has the upper hand in this competition. There is speculation that we’ll see Ham in both a traditional fullback spot as well as at tight end. Coming into the offseason, I predicted that he’d be cut due to his salary. That hasn’t happened, so I got this one wrong. Instead, it looks like the former UDFA will play a really important role on offense (and special teams).

In some ways, the offense will mirror last season’s insofar as there’s still a major emphasis on running the ball. The hope, of course, is that O’Connell and OC Wes Phillips find a way of being more effective.

In things go as expected, we’ll see the Vikings keep five of their seven options. Koback and Bargas will be cut. Cook, Mattison, Nwangwu, Chandler, and Ham will be the five Vikings in the RB room. It’s a deep, talented group that can put defenses in a bad spot.

Editor’s Note: This piece is part of a larger roster prediction series. The previous piece has covered QB position.