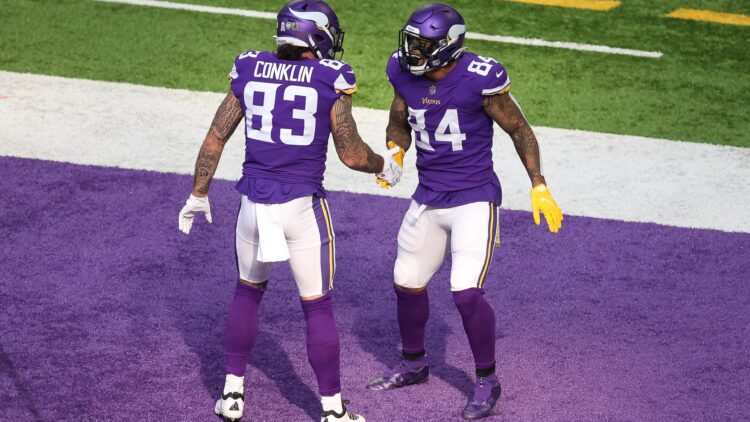 After missing the entire 2021 season due to injury, Irv Smith Jr has high expectations upon his return for the Vikings. Let’s take a look at what’s in store for Vikings tight end as he enters the final year of his rookie contract.

Kevin O’Connell will play a big role in Smith’s performance this season. Fresh off of his Super-Bowl-winning season, O’Connell had a front row view to the Rams high powered offense. The Rams (who ranked 5th in passing offense last season with 4,642 yards) had 400+ more passing yards than the Vikings last season. With this in mind, we can hope the Vikings offense will be more pass heavy, and Smith will undoubtedly be expected to capitalize on this ‘new look’ offense.

In a recent interview, O’Connell was asked about Smith’s role in the Vikings offense. He stated that Smith was “going to be a major part of what we do.” If you look at the Vikings depth chart, there’s not much competition behind Smith. The favorite for TE2 is Ben Ellefson. Ellefson, who was with the Vikings last year, only has one target to his name in Purple. Newly acquired TE Johnny Mundt has a shot to push Ellefson for the #2 spot in training camp. Mundt, who spent his last 5 years with the Rams, has ties to new OC Wes Phillips and HC O’Connell. Otherwise, the team has recent late-round picks Zach Davidson and Nick Muse.

The emergence of Justin Jefferson will also aid in Smith’s success this season. We seem to forget that Smith and Jefferson have yet to play a full season together. In 2020, Jefferson was yet to be a starter for the first couple games. Plus, the team still had Kyle Rudolph at TE. Smith started 7 games in the 2020 season, but was still in a timeshare with Rudolph. With Rudolph gone – and Jefferson becoming a superstar – Smith should have some greater opportunity.

Overall, Vikings TE Irv Smith Jr. has the tools and opportunity to make the most out of his contract year. If we look at the game plan for O’Connell and company, all signs point to Smith having the breakout year he was supposed to have last year.