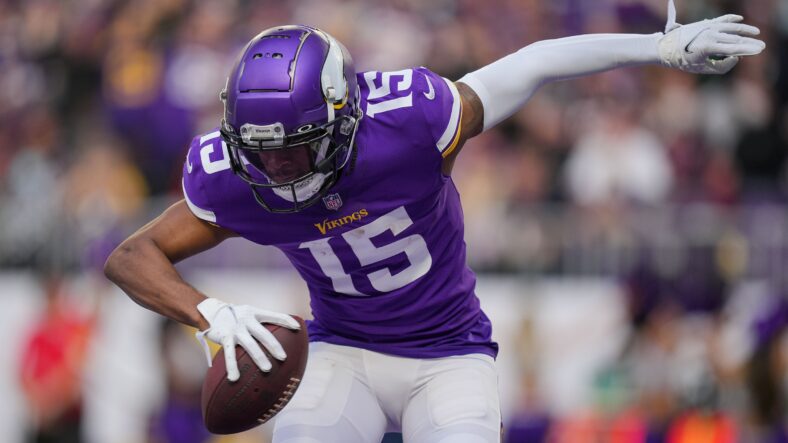 Forced to guess, I’d say that Ihmir Smith-Marsette will be Minnesota’s WR4.

The 2021 fifth-round pick didn’t receive a ton of opportunity last season. Justin Jefferson, of course, has a gravitational pull in the Vikings passing game. Adam Thielen got his fair share of attention when healthy, and K.J. Osborn enjoyed a mini-breakout. Plus, Dalvin Cook gets a lot of touches. Given the context, it’s unsurprising that Smith-Marsette wasn’t a key part of the purple offense.

Even still, I think I can press my point: Ihmir Smith-Marsette has an opportunity to complement the rest of the Vikings’ skill.

The 22-year-old is 6’1 and ran a 4.43 forty. The height and speed translated to a massive 23.2 yards per catch average (5 catches for 116 yards). Of course, it’s a small amount of catches. He won’t be able keep that average so high once his receptions increase, though it’s likely he can still be a deep threat. His average depth of target was 21.3 yards.

Jefferson, Thielen, Osborn, and Cook will all demand a ton of attention. More often than not, their touches will be in the short and intermediate areas of the field. Ihmir Smith-Marsette can use his speed to beat defenses deep. If an opposing defense devotes too much attention to all of Minnesota’s high-end skill – which would be a reasonable thing to do – then Smith-Marsette has the capacity to go for a long TD.

He played 55 snaps out wide and 31 in the slot. PFF actually gave him a 65.5 receiving grade in his limited work. He only had 6 targets last season, so he made the most of the opportunities he received (no pun intended).

If he can be a deep threat who gets somewhere around 20-30 catches, Smith-Marsette will be a valuable part of the team. Simply showing a handful of times that he’s capable of beating a team deep will force a defense to focus on him. As a result, the rest of the offense will benefit since the defense will have yet another weapon to be concerned about.