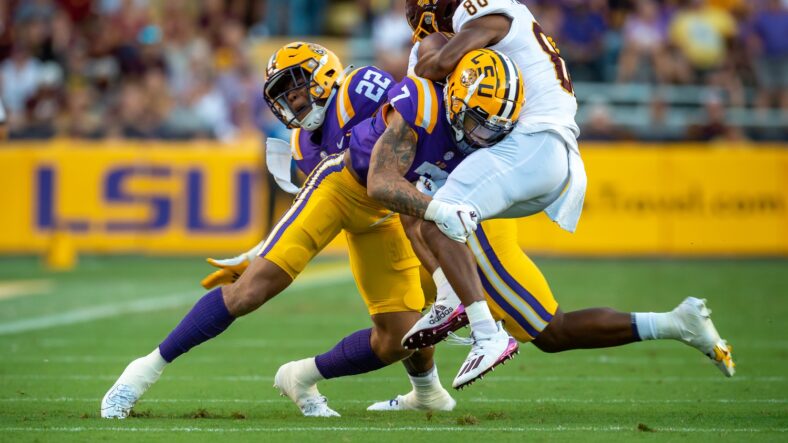 Despite Rick Spielman and Mike Zimmer’s obsession with drafting first round cornerbacks, the Minnesota Vikings are once again in need of a lockdown cornerback this offseason. As of right now, the Vikings have two starting-quality corners on the roster in Patrick Peterson and Cameron Dantzler. However, they are lacking a shutdown corner, and defensive coordinator Ed Donatell’s defensive system requires at least one elite cornerback.

Fortunately for the Vikings, there are some extremely talented corner prospects in this year’s draft; they have the #12 overall pick, which will give them a shot at some of the best players on the board.

To start, Derek Stingley Jr. has ideal measurables for a first-round cornerback. At 6’1 195 lbs., he is of a similar build to many successful corners. If you compare him to Marshon Lattimore, for instance, they are of virtually identical size and athletic ability. Lattimore is 6’0 192 lbs., which is slightly smaller than the younger prospect.

Stingley also has elite speed and lateral quickness. At LSU’s Pro Day, he recorded a sub 4.4 second 40-yard dash. This speed gives him the ability to shadow talented receivers and follow them up the field vertically. It also provides him the opportunity to recover ground quickly if beaten on a route.

On the field, Stingley stands out as a natural athlete with playmaking abilities. He has loose hips and a low, smooth backpedal. He has long arms and is patient in press coverage, possesses the speed to swivel and carry receivers down the field, along with the burst to close the distance when beaten. Stingley also plays the ball aggressively and intuitively, anticipates out-breaking routes, and baits quarterbacks into throwing his way. Paired with good ball skills, these traits make Stingley an elite prospect.

When Stingley was on the field, he played at a high level, especially in 2019. However, Stingley has had issues staying on the field, and a foot injury kept him out of all but three games last season.

New defensive coordinator Ed Donatell likes to run match-quarters coverage, which requires a lockdown cornerback who can shadow the opposing team’s #1 receiver, following them vertically down the field with no help over the top if necessary. Stingley has the rare, requisite abilities to fit into this scheme, and would likely fit in in a variety of defensive coverage systems. As a defensive back specialist, Donatell would love to work with a prospect like Stingley.

As already mentioned, Stingley was not consistently available throughout his collegiate career. He has played in only ten games over the past two seasons, and his best play was back in 2019. In addition, Stingley struggles with physical play in general and tackling bigger running backs in particular.

Overall, Derek Stingley Jr. is an elite prospect who could very well find himself playing in purple again next season.