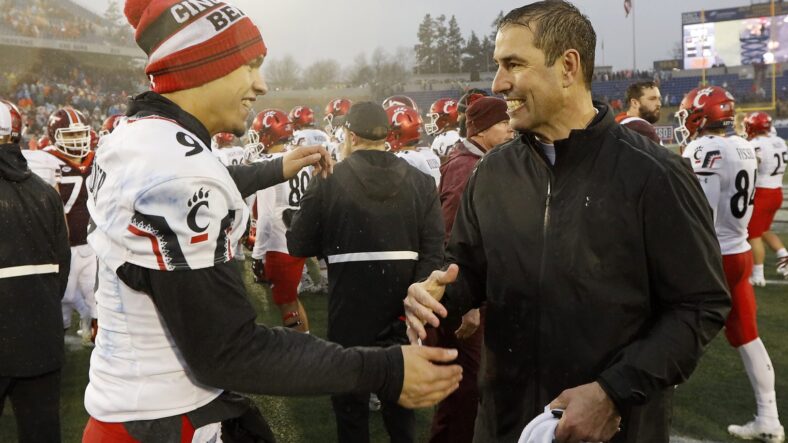 Just like the NFL season is fast approaching, we are nearing the day where college football teams will arrive on campus and begin their own preseason work. As a self-proclaimed NFL Draft nerd, I get almost as excited for the college football season as I do for the NFL season. Because of that, I am putting together guides for many of the notable college football programs ahead of the 2022 season. Whether you’re a seasoned college football viewer, or just getting into it for the first time, there is something here for everyone. First up, we break down the Cincinnati Bearcats of the American Athletic Conference.

The Cincinnati Bearcats were the first Group of Five team to make the College Football Playoff on the back of a 13-1 overall record. They also went 8-0 in the American Athletic Conference and won their second straight conference championship over Houston. As a result, the program saw a Group of Five-record nine prospects be selected in the 2022 NFL Draft.

Now, Luke Fickell’s team looks to regroup without two-time AAC Offensive Player of the Year Desmond Ridder leading the way at the quarterback position. On top of that, they will have to replace the majority of their defensive lineup, including fourth overall pick CB Ahmad Gardner. Now in the transitory period towards a new era, the new-look Bearcats look to win a third-straight AAC title before heading to the Big 12 in 2023.

Who Will Be the QB?

The emergence of the Cincinnati Bearcats being a national contender coincided almost perfectly with Desmond Ridder being named the starting quarterback. The 2017 Bearcats went 4-8, and then immediately jumped to 11-2 when Ridder entered the program. Now for the first time in four years, the program has uncertainty at the QB position. There are two potential answers right now: redshirt sophomore Evan Prater or Eastern Michigan transfer Ben Bryant.

The two players each come with intriguing, albeit very different, skillsets. Prater still needs to develop as a passer, but his playmaking ability with his legs could make him a difficult player to contain. Meanwhile, Bryant is not nearly as mobile, but is much more polished inside the pocket.

If there are Vikings fans that want Minnesota to find their post-Kirk Cousins QB as soon as possible, then Bryant is the guy you should be rooting for to win this job. Bryant left Cincinnati for Eastern Michigan prior to the 2021 and threw for over 3000 yards and completed 68.4% of his passes in his first season as a starter. Now, he’s back with his original program after using a year to prove himself away from Ridder. If he can continue that type of production and help Cincinnati remain competitive, he’ll likely become a top-100 draft pick in 2023.

The Defense Led by Brothers

As a result of being a top-five scoring defense in the nation during 2021, more than half of last year’s Cincinnati Bearcats defensive starting lineup is now in the NFL. Even still, there is reason to believe this unit can remain one of the better collegiate defenses in the country.

One of the biggest reasons for that is the acquisition of linebacker Ivan Pace from Miami of Ohio through the transfer portal. He was named a first-team All-MAC defender in 2021 and paced the Mid-American Conference with 125 total tackles, including 13 TFLs with four sacks. Pace joins his brother Deshawn, who had four interceptions last year, to create a formidable duo at linebacker.

In the secondary, Cincinnati also has to replace production of the fourth overall pick, Sauce Gardner as well as Coby Bryant. They will heavily rely on senior Arquon Bush to provide leadership for up-and-coming players like Justin Harris, Todd Bumphis, and Sammy Anderson Jr.

If you choose to ignore everything else in these guides, at least tune in daily for this section. In these conclusions, I will list players that I could see as potential Minnesota Vikings draft picks in upcoming years. If the Vikings do not end up being the landing place for Bryant at quarterback, there’s one more obvious choice in my eyes: tight end Josh Whyle.

Every year, there are a couple tight ends that emerge from the pack and end up going in the late first-early second rounds of the draft. Whyle could be that prospect in 2023. He certainly played a part in Ridder’s success with Cincinnati, recording six touchdown catches in each of the 2020 and 2021 seasons. Another season of this production, with a brand-new QB no less, should be enough to catch the eyes of NFL scouts.

Whyle’s fit with the Minnesota Vikings is nearly perfect. The Vikings have Irv Smith Jr. entering a contract year and very little depth behind him. They need to find a solution to their tight end problem in 2023; a problem that has not had a clear solution since Kyle Rudolph was on the team. Whyle has a knack for getting open in the red zone that should have Kwesi Adofo-Mensah’s attention. Not only that but he is a willing blocker, something that Smith has not been able to be for the Vikings. As the 2023 draft approaches, keep an eye on Whyle and his production. 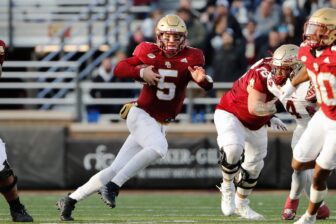