A Vikings Fan’s Viewing Guide to CFB: Is UCF Back? 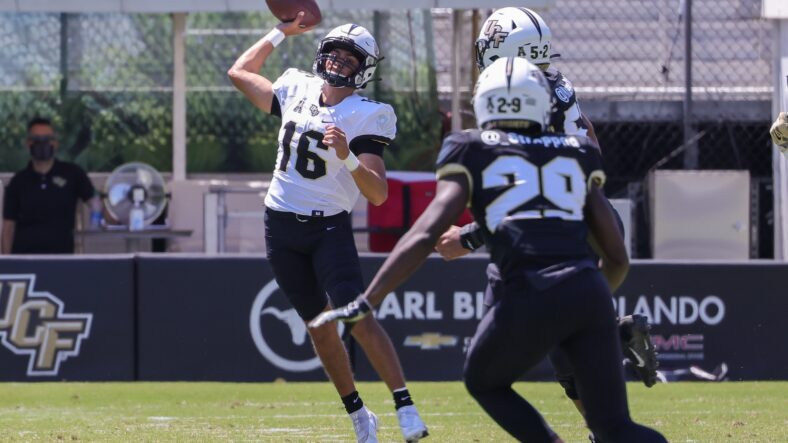 Whether you’re a seasoned college football viewer, or just getting into it for the first time, there is something here for everyone. After covering the Houston Cougars yesterday, my pick to win the AAC, today we go over the team that many feel could be the team that upsets Houston’s plans: the UCF Knights.

Ever since UCF’s 13-0 season that ended in a Peach Bowl victory over Auburn, there has been a steady downturn in the Knights’ yearly win total. This is for a couple reasons. Firstly, head coach Scott Frost left the program for Nebraska in 2018, and under Josh Heupel’s watch, UCF steadily got worse. This decline isn’t all on coaching, though. Since 2018, the Knights have sent 12 prospects to the NFL Draft, including CB Mike Hughes who the Vikigns selected in the first round of the 2018 draft.

However, 2021 saw a bit of a resurgence for UCF. They hired Gus Malzahn after an eight-year tenure with Auburn, and in his first year with the Knights, they went 9-4 with a victory in the Union Home Mortgage Gasparilla Bowl over the Floride Gators. Now, they enter 2022 hoping to win their first AAC title since 2018.

QB Dillon Gabriel played just three games in 2021 before going down with a shoulder injury on the final play of UCF’s loss to Louisville. After that, freshman QB Mikey Keene was thrust into the starting lineup, and he completed 63% of his passes throwing for 1730 yards, 16 TDs, and six INTs in those final 10 games. UCF went 7-3 to close the year; likely the best-case scenario anyone could have hoped for.

Going into 2022 though, Keene’s performance means there is a QB battle, similar to the one that Cincinnati is going through. Gabriel transferred to Oklahoma, and now redshirt junior John Rhys Plumlee is thrown into the mix after transferring in from Ole Miss. Plumlee has been used by Ole Miss mostly for his legs while Keene is a pocket presence. With a litany of receivers, including transfers Kobe Hudson and Kenmore Gamble, whoever wins the job should be in good hands.

Looking to the defensive side of the ball for UCF is where things get interesting. They lost their star linebacker Tatum Bethune to Florida State, and defensive tackle Kalia Davis is in the NFL. They went into the winter needing to improve their LB position, and the Knights made it a big emphasis in the transfer portal.

The team brought in four linebackers through the portal: Terrance Lewis, Jason Johnson, Walter Yates III, and Brandon Jennings. Johnson was an FCS All-American during 2021 with Eastern Illinois, and he looks to replace much of the production left behind by Bethune’s exit.

Staying on the defensive side of the ball, the Knights have a number of intriguing CBs this year. The Vikings have taped together a secondary with experienced veterans like Patrick Peterson and Chandon Sullivan to go along with youngsters Cam Dantzler and rookie Andrew Booth Jr. However, Minnesota could still use some help from a lockdown corner.

Look no further than UCF’s Davonte Brown. Brown had 12 pass defenses in 2021 and anchored a secondary that allowed 210 passing yards per game and 0.9 passing TDs per game. At 6’2, Brown has the length to play on the outside, and his incredible length allows him to hang with even the biggest NFL receivers. Assuming Peterson is no longer a top-tier corner heading into 2023, Brown could be the perfect replacement for him at CB2. It would also create an incredible young secondary of Booth, Brown, Cam Bynum, Dantzler, and Lewis Cine.

One final note: if Mikey Keene keeps being the quarterback that he was in 2021, we may need to have a discussion about him as the Vikings QB ahead of the 2024 draft. 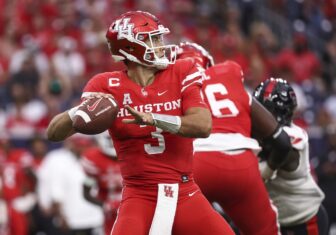 Also Read:
A Vikings Fan’s Viewing Guide to CFB: Can Houston Get Over the Hump?