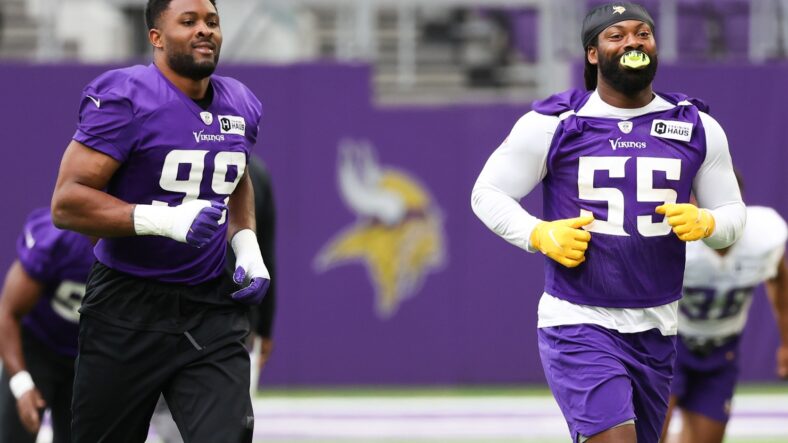 The folks over at PFF recently did a series where they put forth 3 bold predictions for every NFL team. The NFC North article, of course, features some PFF predictions when it comes to the Vikings.

Apparently we’ll see Justin Jefferson lead the league in targets and receiving yards. The defense is going to be a top-10 group, and Kirk Cousins will regress in his PFF grade. Take a look at the rationale for the defense performing so well:

Things went badly for the Vikings last season, but it’s easy to overlook 1) how beat up they were at key positions, and 2) the additions they’ve made this offseason.

Danielle Hunter has now missed the majority of the past two seasons but is still just 27 years old, and the last time he was healthy he notched a career-high 88 pressures. Za’Darius Smith missed most of last season for Green Bay but tallied 144 pressures over the previous two seasons. They now feature as bookend pass rushers on the same defense.

The secondary was a weak area, but two top draft picks in Andrew Booth Jr. and Lewis Cine will provide reinforcements. The Vikings’ defense was also historically bad in two-minute drill situations a season ago. If the unit stays healthy, this is a vastly better defense than last year’s group.

Indeed, there is good reason to believe the defense can bounce back. Another thing to keep in mind is that Harrison Phillips and Jordan Hicks have been added. For some, this will mean the Vikings haven’t made too much of an improvement since these players simply replace Michael Pierce and Anthony Barr. The hope, though, is that they are better scheme fits and that they’re more available. In recent seasons, Pierce and Barr missed a lot of time.

The explanation for a Cousins regression is also interesting. Take a look at some of what the PFF prediction piece has to say about the Vikings QB1:

The offense as a whole may improve, but Cousins may have already hit his ceiling. It would take something impressive to build upon a season with an 88.2 PFF grade that saw him pass for 33 touchdowns and only seven interceptions at 7.5 yards per attempt and a 77.6% adjusted completion rate. Cousins is already playing at a level that should foster an elite offense. Minnesota may get better in that regard this year, but my money would be on Cousins seeing a regression in his grade, not an improvement.

Like with all predictions, we’ll need to wait and see. Cousins was very good last year, but it’s certainly possible he finds a way to keep improving.

The expectation from many is that Minnesota will take a good step forward in 2022. Coaches, players, writers, and fans have all been expressing a lot of enthusiasm about the changes made at GM and among the coaching staff. There were lots of positives to takeaway from the Raiders preseason game. Hopefully, the 49ers game features more positives to build on. It’ll all add up to a Week 1 game against the defending division champion Green Bay Packers.