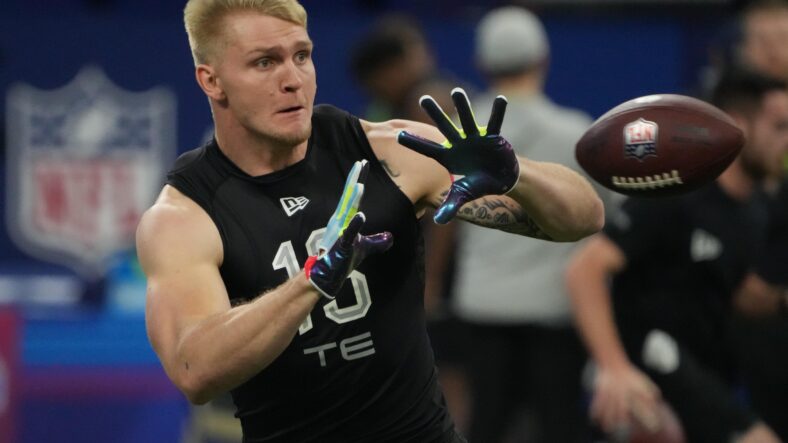 This past week, the crew at PurpleTerritory Media went through the first round of the 2022 NFL Draft and made each of the 32 picks. Obviously, the team’s predictions are going to be 100% correct. That said, who are the headliners going into the second round of the draft?

Luckily for us, I also posted a brand-new big board that goes 200 prospects deep around the same time as this mock draft. Thus begins a two-part series where we will be going over the top prospects at each position that were not lucky enough to be included in this mock draft. Today, we discuss the offensive side of the ball.

Of all the quarterback prospects in this 2022 draft class, Kenny Pickett seems like he is the most NFL ready. He has been an accurate thrower of the football throughout his career at Pitt and showcased some sneaky athleticism as a scrambler. The questions around Pickett are whether he and his tiny mitts can grow into anything better as a football player. It’s certainly possible, especially given his pure arm talent, but only time will tell.

Every year, it seems like there is a surefire running back or two that sneak into the first round of the draft. This year, it doesn’t quite look like an RB will land that high, nor is there any one prospect that has truly taken the reins as the top player at the position. My board has Hall at RB1, but there certainly a three-horse race between himself, Isaiah Spiller, and Kenneth Walker III. Hall’s massive production at Iowa State along with his potential as a receiver just pushes him to the front of the pack.

Christian Watson is another small school player that has gone overlooked for much of this draft process. After he turned heads at the scouting combine, people began to take notice of the North Dakota State receiver, but that is hardly where his potential ends. He’s a massive receiver and has very sure hands. It doesn’t hurt that he has experience as a kick returner, either. Watson could help an NFL team immediately in a bevy of ways.

The 2021 draft class was highlighted by a couple of ridiculously talented tight ends in Kyle Pitts and Pat Freiermuth. The 2022 class does not have anyone ready to make nearly the amount of impact as those two players, and that will undoubtedly cause all the prospects to fall into the second day of the draft. At the top of this group sits Trey McBride, who ultimately should be a mid-second round selection. His combination of run blocking, route running, and receiving are everything you want in a starting TE.

Trevor Penning is one of the many prospects in this class that could land in the top-15, or he could fall out of the first round entirely. It all really depends on how the board falls, and in our mock draft, only four tackles ended up coming off the board in the first round. Penning is a behemoth at 6’7 and 325 pounds, and personally, I’d take him in the first round. He displays terrific strength, and his athleticism allows him to cover great lengths of the field in just a few strides.

It can be argued that Sean Rhyan could play tackle in the NFL, but he is a smaller player that certainly seemed much more proficient in run-blocking during his time at UCLA. Depending on the situation that whichever NFL team that draft him finds themselves in, this could prompt a move to guard. Additionally, his lack of length could force this move inside. Either way, he is an athletic player with terrific power as he moves off the line. Even if he has to play on the IOL, Rhyan is a terrific option in the second day.