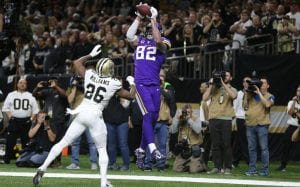 Well, those rumors about a potential Kyle Rudolph/Minnesota Vikings reunion are officially over. The 33-year-old tight end will reportedly sign a one-year contract to head to the Tampa Bay Buccaneers and join up with Tom Brady, per Tom Pelissero of NFL Network. With Rob Gronkowski’s recent retirement, this seems like the replacement plan for the future Hall of Famer.

After a disappointing 2020 with some struggles with injury and overall production, Rudolph and the Minnesota Vikings parted ways following a 10-year relationship. Throughout that time, he recorded 479 receptions, 4488 receiving yards, and 48 touchdowns. He was also a massive contributor to the Vikings most recent playoff runs in 2017 and 2019. 2020 was the first year he dipped below 30 receptions since 2014 when he played just nine games.

He joined up with the New York Giants, signing a one-year contract to play in the Big Apple. Rudolph forming a 1-2 punch at tight end with Evan Engram, who was coming off a 650-yard season in 2020. The experiment didn’t quite go as planned as Daniel Jones struggled with injuries and neither tight end really produced to the level that New York was hoping. Rudolph recorded just 26 receptions, 257 yards, and a single touchdown.

With Irv Smith coming off a meniscus tear that kept him sidelined for the entire 2021 season, and Tyler Conklin headed to the New York Jets, the Vikings are quite low on pass catching tight ends once again. This caused the desire for Kyle Rudolph to return to Minnesota and at least be a depth piece.

There are still options out there for the Vikings if they want to sign another TE for training camp. With the recent waiving of QB Nate Stanley, they have an open roster spot to bring someone into the fold. One possibility is Eric Ebron, who has spent the last two seasons with the Pittsburgh Steelers. Ebron struggled with injuries in 2021, and Pat Freiermuth claimed the starting spot almost immediately.

Otherwise, the coaching duo of Kevin O’Connell and Wes Phillips have expressed faith in Johnny Mundt. Mundt was an LA Ram in 2021 but played a much larger role as a blocker than a receiver. To this point in his career, Mundt has recorded just 10 receptions over his five-year NFL career.

At the end of the day, Minnesota has options at the tight end position if they choose to go that route. Kyle Rudolph is no longer one of them, though. The Tampa Bay Buccaneers will open up their season on September 11th by playing the Dallas Cowboys on Sunday Night Football. 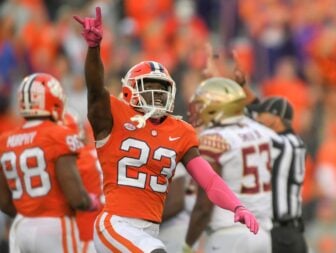 Also Read:
And Then There Was One: Andrew Booth May Soon Be the Only Unsigned Vikings Rookie