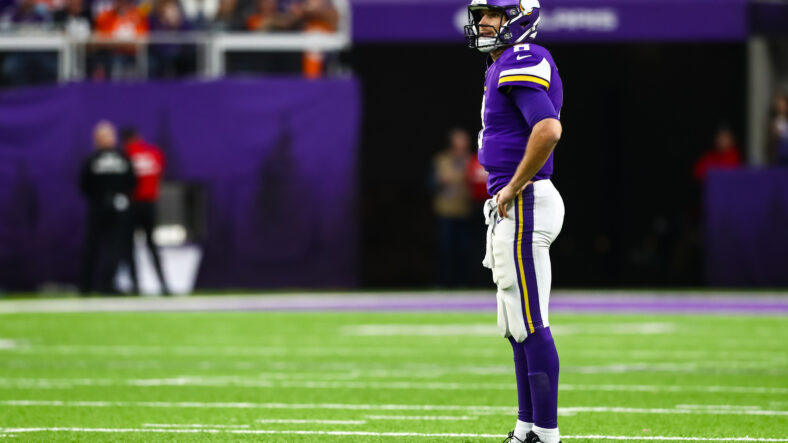 It’s year 5 of Kick Cousins’ time with the Vikings. The most important thing the QB1 can do for his team is help lead them to wins.

Indeed, Cousins has thrown a lot of TD passes since coming to the Land of 10,000 Lakes. He has limited his turnovers and been remarkably durable. He puts in a ton of work and effort. What hasn’t followed, though, is a lot of wins. He is a perfect .500 for his career. He’s 33-29-1 since coming to Minnesota.

His recent interview with The NFL Network took on that topic. Take a look:

The part that was most interesting to me was the discussion of winning much more. Take a look at the quote:

I think ultimately in this league, the whole thing especially the quarterback position, is built on winning. And so we got to win, that’s the goal. To be playing meaningful January playoff games, to be winning those games, that’s really where we want to get to.

Shortly thereafter, he expands even further:

We’ve been .500. And so we’re saying, ‘Hey, we gotta get over the hump. We gotta get to a place where we’re winning the division, hosting playoff games, winning playoffs games.’ And so we’re just hungry to do whatever has to be done to get to that place.

One of the continual concerns among Kirk Cousins critics is that the Vikings haven’t won very much since he came to town. In 2017, the team made it all the way to the NFC Championship Game. They did so with an elite defense and a journeyman QB who played wonderfully. Instead of trying to replicate that formula, Rick Spielman opted to sign Cousins to a large deal.

Much can be said about how much blame the QB1 deserves for the lack of success Minnesota has experienced these past four seasons. What we can say for certain is that being the team’s highest-paid player and the one who plays the most important position means he’ll get disproportionate amounts of praise or criticism. When things go really well, Cousins will get a lot of praise. When things go really poorly, Cousins will get a lot of criticism. That’s part of what comes with signing the huge deal to be an NFL team’s starting QB.

Kevin O’Connell has a lot of weapons to work with on his offense. The ascent of Christian Darrisaw, the solid steadiness from Brian O’Neill, and the robust RG competition offer some hope that the OL can show improvement. The offense does have a lot of potential. Excellent play from the QB will bring it all together.

The Vikings are relying on Kirk Cousins to be one of their best players. Being a difference maker throughout the season will allow this team to start piling up more wins.