Kirk Cousins Led The Vikings in Rushing on MNF 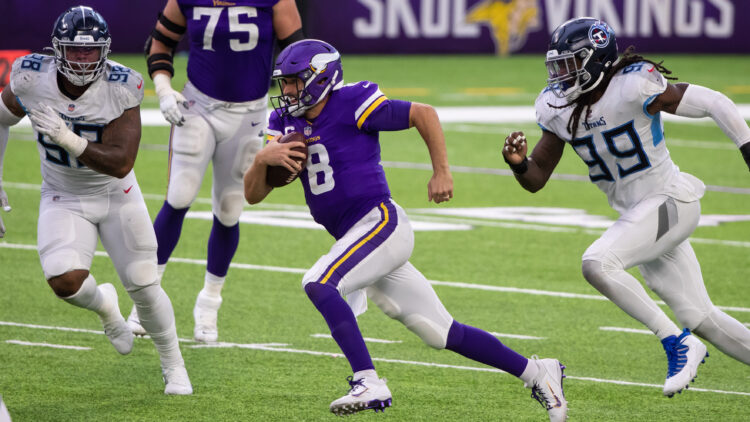 One way we can tell that the Vikings’ offense played poorly on MNF rests in the simple fact that Kirk Cousins led the team in rushing.

For a squad that boasts Dalvin Cook, Alexander Mattison, Kene Nwangwu, and Ty Chandler at RB, there’s very little reason for the QB to take the lead in rushing yards. Alas, it was a very poor game for Kevin O’Connell’s group.

Minnesota’s first play on offense foreshadowed how things would go. Starting from their own 25, the Vikings decided to hand the ball off to #4. Unfortunately, Josh Sweat was able to tackle him for -1 yards. The next two plays featured a 6-yard pass to Justin Jefferson before an incompletion to Jefferson. The three-and-out to start the game offered a hint for how the day would go.

In the end, Kirk Cousins led the Vikings’ MNF rushing attack since he had 20 yards. That was enough to surpass Cook, who had 6 carries for 17 yards. That’s a 2.8 yards-per-carry average. Jalen Reagor did take his single carry for 17 yards, and Mattison had 2 carries for 8 yards.

Regardless, it was a brutal game for the offense. If you eliminate Cousins’ two runs – which weren’t designed runs – then there were only 9 running plays. Folks, that’s far too low, especially since Cousins attempted 46 passes. That ratio – 9 runs, 46 passes – is usually going to lead to a poor outcome for the Vikings.

The game book offers other statistics that illustrate how out of sorts the offense was.

C.J. Ham was only in for 3 snaps, suggesting that the deficit prompted O’Connell to abandon his more run-heavy looks. Adam Thielen ended up leading Minnesota in receiving yards, but we know that he only started getting targets in garbage time. It was another week where the veteran wasn’t leaned on enough. K.J. Osborn is a player whom many believed would continue his breakout. He had 2 targets that resulted in 2 catches for 25 yards.

We knew that adversity would be coming for the Vikings at some point. On Monday, it arrived. The key will now rest in seeing how Minnesota responds.

Indeed, the next game won’t be an easy one. Many folks are still inclined to overlook the Lions since Detroit has been poor for a long time. Don’t overlook them. Last year, they split the games with Minnesota, winning on a last-second TD in their second game. In other words, the Vikings don’t have a ton to brag about with their recent history against Detroit. Both teams are entering the game at 1-1 for the year.

Kirk Cousins finishing as the Vikings’ leading rusher on MNF underscores how the offense wasn’t in a good rhythm. Moving forward, O’Connell will need to recommit to establishing Minnesota’s offensive identity.

The next opportunity comes this Sunday when Detroit comes to U.S. Bank Stadium.