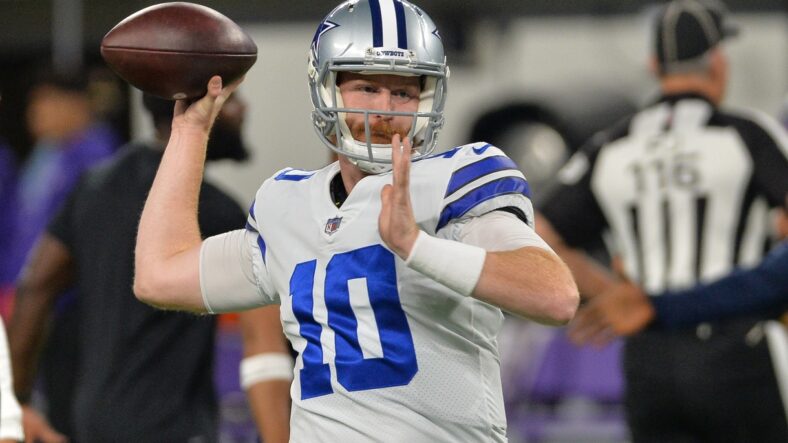 Oct 31, 2021; Minneapolis, Minnesota, USA; Dallas Cowboys quarterback Cooper Rush (10) warms up before the game against the Minnesota Vikings at U.S. Bank Stadium. Rush has been announced as the starter for the game. Mandatory Credit: Jeffrey Becker-USA TODAY Sports

If you’re a Vikings fan living in Minnesota, you probably had the pleasure, or displeasure, of watching the Dallas Cowboys take on the Cincinnati Bengals on Sunday. If you did watch this game, you almost certainly went through your own version of Purple PTSD as that game unfolded. One of the QBs that has become infamous in recent Minnesota Vikings lore showed up. That QB is Cooper Rush, and he led the Cowboys to a 20-17 win over Joe Burrow and the Cincinnati Bengals.

As a starting quarterback, Cooper Rush’s teams are now 2-0. If you remember and haven’t already suppressed all memory of that game, Rush’s first career win came against the Minnesota Vikings in 2021. He torched the Vikings defense in Week 8 for 325 yards and a pair of touchdowns in a 20-16 win.

Making things worse, that game was in Minnesota. And even more disastrously, the Vikings were coming off a bye. They had a full two weeks to prepare for a backup QB at home, and they still lost the game.

Rush once again landed in the QB1 role for the Cowboys this week, and for multiple games moving forward, after Dak Prescott broke his right thumb against the Tampa Bay Buccaneers. He actually came into the game for the final stretch of that game against Tampa, completing 7/13 passes and 64 yards.

In the latest dose of Rush magic, the Cowboys QB wasn’t quite as dominant as he was in Minnesota, but he still played a strong game against the reigning AFC champs. Rush passed for 235 yards and a touchdown in the Cowboys first win of the season.

Dallas jumped out to an early lead on Cincinnati, sparked by a nine-yard touchdown pass on the opening 12-play drive. Quickly, the lead ballooned to 17-3 before Joe Burrow started heating up and eventually led a game-tying drive late in the fourth quarter. Then with under a minute left, Rush led the Cowboys to a game-winning field goal to take the game, 20-17.

This means the Cooper Rush era is now 2-0 moving into a Week 3 matchup with the New York Giants. Dak Prescott is expected to return in the next month or so though, and honestly, that should give comfort to Vikings fans. Minnesota is set to host Dallas once again this season in a Week 11 matchup. 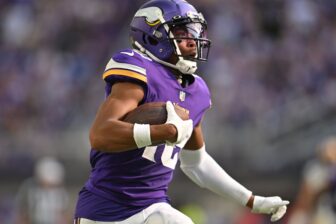