Rudolph is With The Bucs; Do The Vikings Have Other TE Options? 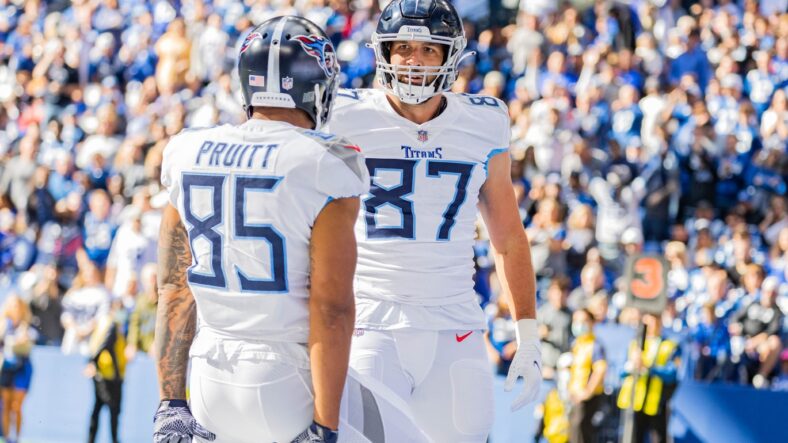 Some Vikings fans were likely disappointed to see the news that Kyle Rudolph decided to sign with the Buccaneers. If his ultimate goal is to compete for a Super Bowl, then partnering with Tom Brady is definitely the right decision. Tampa Bay’s chances are far greater than Minnesota’s. Apparently, there was shared interest between Rudolph and the Vikings, a reality that makes some sense given the uncertainty at the TE position. It’s possible that the flirtation between Rudolph and Minnesota reveals the team’s desire to add a steady veteran. If that’s the case, then there are some options available.

Former Vikings TE MyCole Pruitt has played well for the Titans over the past several seasons. Last year, he finished as the 11th-best TE in the PFF rankings. Unfortunately, he suffered a bad ankle injury at the beginning of 2022. If he is nearing a return, Minnesota may be interested in adding him. The vast majority of his snaps came inline. Tennessee also got him lined up in the slot, out wide, and in the backfield, though these spots were much less common.

Recently, Will Goodwin of Vikings Territory explored the possibility of adding Eric Ebron. Take a peak at some of the rationale: “For an offense that already has big playmakers in Dalvin Cook and Justin Jefferson, having targets that can simply move the chains and make positive plays will be invaluable. In five of his eight NFL seasons, Ebron has amassed 27 or more first downs and at least 537 yards.”

Some other notable names on the FA list are Jimmy Graham, Jared Cook, Blake Jarwin, and Rob Gronkowski (Gronk is retired; if he decides to come back, he won’t go to Minnesota).

Now, it’s entirely possible that Minnesota’s coaching staff has more confidence in their tight end group than the fans do. Johnny Mundt, perhaps, has the capacity to take on a larger role. He was brought over from the Rams, so Kevin O’Connell and Wes Phillips must think he has some upside. It’ll also be interesting to see if sophomore tight end Zach Davidson can make some plays during preseason. He didn’t see any opportunity as a rookie, but that was expected after being a late-round pick. He’s a massive 6’7.

The solution to the Vikings’ TE worries rests in seeing Irv Smith Jr. back and better than ever. There’s no debating his talent. If Smith is healthy, Minnesota will have another weapon for their offense. He’s simply one more matchup issue that opposing defenses will need to worry about.