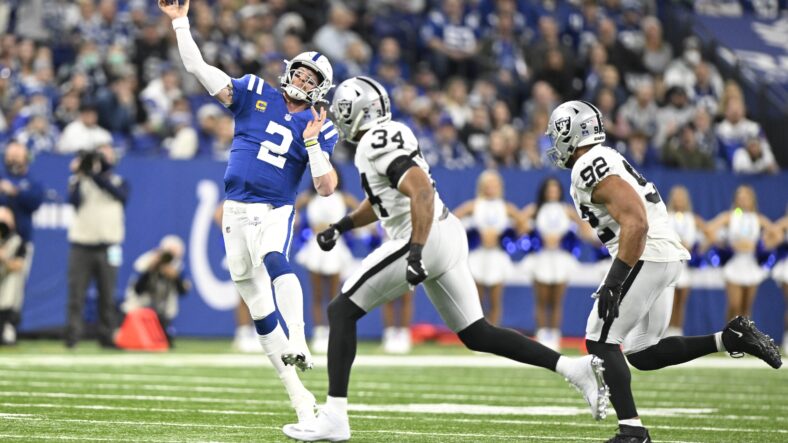 After the Russell Wilson trade and Aaron Rodgers extension that occurred just hours apart on Tuesday, it had already become clear that the well of proven starting QBs was rapidly drying up. Then on Wednesday afternoon, yet another domino fell with a second trade in a matter of 24 hours. This time, it was the Indianapolis Colts sending Carson Wentz to the Washington Commanders for a pair of third round picks. This leaves three (four if you want to throw in Jordan Love) notable quarterbacks that have been rumored to be on the trade market: Jimmy Garoppolo, Deshaun Watson, and of course, Kirk Cousins.

This latest deal involving Wentz is notable for a variety of reasons. Most obvious, Washington gave up a heck of a lot for a guy that has been a shell of himself since tearing his ACL in 2017. Granted, 2021 was a step in the right direction after an abysmal 2020 campaign.

Playing under center for a Colts team that went 9-8, Wentz threw for 3563 yards, 27 touchdowns, and seven interceptions while completing passes at a 62.4% clip. That said, the Commanders are making quite the gamble with this trade. Not only are they sending a pair of picks to Indianapolis, but they are also paying the entirety of Wentz’s $28.2 million cap hit.

The Minnesota Vikings could be impacted by this trade in a number of ways. Many fans will likely look at this trade and wonder what exactly the Vikings could get in a trade for Kirk Cousins. The number of teams needing a quarterback hasn’t changed at all as Indianapolis now finds themselves without either a QB or a first-round pick to fulfill this need. It’s also hard to dispute that Cousins is a higher caliber of QB than Wentz, especially over the past few seasons. Given that is the case, the Vikings realistically should hold out for first-round picks if there were to be a trade regarding their quarterback.

The trade return could be lucrative for Cousins, but this Washington Commanders trade also could send aftershocks into the NFL Draft. The Commanders were a team that many analysts have been penciling in to take a QB with the No. 11 pick in the draft.

That clearly changes with the acquisition of Wentz. Washington suddenly becomes a candidate to select a corner with their draft pick, and that could impact the Vikings plans of taking a prospect like Ahmad Gardner. At the end of the day, this trade likely doesn’t change much in terms of actual results on the field for the two teams involved, but the ripple effects could impact a number of teams throughout the NFL.