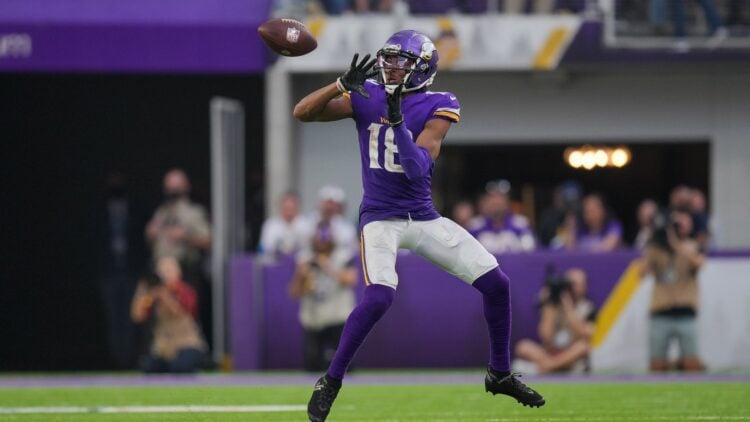 After a pair of record-breaking seasons to open up his NFL career, it makes sense that the third installment of Justin Jefferson’s NFL career would be getting a ton of hype. Pro Football Focus certainly has high hopes for Jefferson in year three as they’ve put him at or near the top of multiple player rankings ahead of the 2022 season.

First of all, he tops their fantasy football wide receiver rankings a year after not being part of the top three ahead of the 2021 campaign. The leap makes sense because the one knock you could make on Jefferson during his rookie season was that he just didn’t reach the end zone enough for a top fantasy receiver. He scored just seven times over the course of 16 games.

Jefferson eliminated that criticism in 2021, though. He was one of just six receivers to record 1000+ receiving yards and 10+ receiving TDs. With his 1616 yards and 10 touchdowns, he recorded the fourth-most fantasy points of among receivers last year. A pretty good showing, and it was enough, not only to put him into the tier named “The Talent, The Situation, The WR Gods”, but he is in fact pacing that group of top-notch receivers.

Equally as impressive as Jefferson’s dominance at the wide receiver position is the age that he is accomplishing these feats at. He still has not turned 23 years old, and he won’t until June 16th.

He along with current Cincinnati Bengals and former LSU teammate, Ja’Marr Chase, have truly raised the bar for young receivers hoping to break into the league. Because of their accomplishments, both of them are also on PFF’s “Top 25 Players Under 25” list.

Jefferson of course comes in at WR1 on this list and is the fifth player overall. He is sandwiched between Tampa Bay Buccaneers LT Tristan Wirfs and Dallas Cowboys LB Micah Parsons. Chase finds himself a couple spots below Jefferson at No. 7.

Trevor Sikkema, the writer who put together the list, heavily weighs Jefferson’s second year when making this ranking. The Vikings wide receiver was certainly dominant as a rookie, but Sikkema says that for Jefferson “to prove that it was no fluke” in year two really put him among the elite in the NFL’s list of young stars.

With Adam Thielen’s prime coming to a close in the next few years, along with a new offensive system under Kevin O’Connell, the Vikings young star cannot slow down now. He will be needed if the Vikings hope to compete in 2022 and beyond. 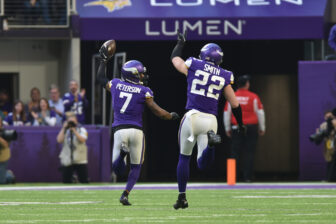