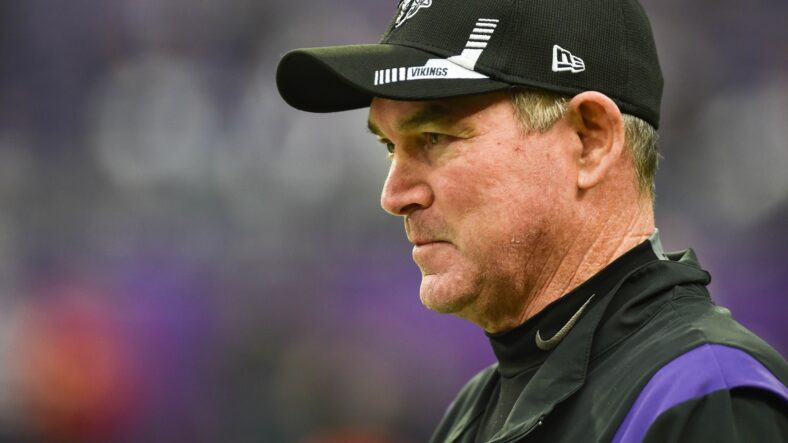 Being an NFL head coach isn’t for the faint of heart. That’s especially true for the Vikings. This is a franchise that has suffered through more than its fair share of heartbreak, largely feeding into the “here-we-go-again” mentality that fuels the heated, bitter criticisms directed toward the team’s leadership. Mike Zimmer, of course, has been getting no shortage of criticism lately, and he’s likely to be fired in about a week. That being said, a question I’ve had rests in what the team’s crusty coach actually deserves from fans.

Clearly, the season hasn’t gone as planned. As a result, Zimmer has very rightly received criticism from fans and writers alike. Earlier in the year, he was consistent in his proclamations about having a talented roster, one that’s capable of putting together a special season. The 2021 season is nearing its conclusion, and the team is officially eliminated from the playoffs. In other words, Minnesota’s HC has failed to overcome the year’s difficult circumstances, thereby contributing to his team’s inability to find any meaningful success.

Nevertheless, my hope is that fans will be able to appreciate Mike Zimmer. For the most part, he has been a good coach for the Vikings, and he deserves positive recognition.

These past two years have been underwhelming, to say the least. Currently, the Vikings have the 31st ranked defense in terms of yards allowed per game. They’re 25th in points allowed per game. It’s been two-straight weeks of zero sacks. The pressure, or lack thereof, made it very difficult for the team to upset the Rams or Packers.

Purple PTSD: Vikings Fans, Don’t Be Scared About Dropping Into The 20s

The ignoble stats, though, don’t characterize Zimmer’s time with Minnesota. The proud coach offered up a truly elite defense in 2017. In the years preceding and immediately following 2017, Zimmer was able to get his defense into top-tier status. It was a welcome change from what we had experienced at the end of Leslie Frazier’s time in Minnesota. The irony, in a sense, is that it’s the breakdown of the defense that will most contribute to the team’s seemingly inevitable decision to move on.

Even if the Vikings lose on Sunday, Zimmer will finish with a healthy winning percentage. It currently sits at .559. The last three coaches couldn’t match that. In fact, only Dennis Green and Bud Grant have done better. It’s also notable that Zim has been able to attract and retain plenty of talent in his time in Minnesota, suggesting players do want to play for him. The latest example was merely future Hall of Famer Patrick Peterson.

In time, Vikings fans will appreciate Mike Zimmer. He gave us an identity. He helped lead us to one of the greatest moments in franchise history (and NFL history): The Minneapolis Miracle. He gave us some truly sensational defenses, and he usually played the Packers tough. At the end of the day, his time will end in some disappointment insofar as he was unable to turn the Vikings into a consistent playoff team and a Super Bowl contender.

Even still, Zimmer ought to be remembered as a successful coach. I, for one, will be cheering for him wherever he ends up.