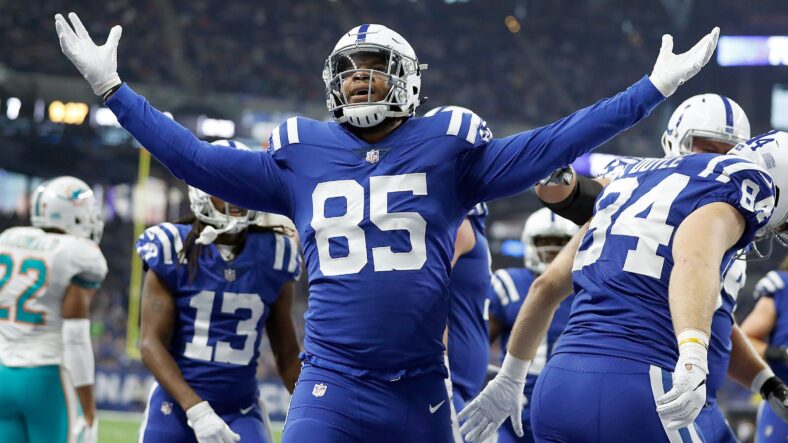 The following questions are about current Minnesota Vikings topics, answered by PurplePTSD. Today is the June 26th edition, addressed in a from-the-hip fashion. If you have questions, please email them to DustinBakerNFL@gmail.com.

Q: If the Vikings indeed sign Kyle Rudolph or Eric Ebron for TE2, who do you prefer?

A: We prefer Ebron as he is about four years younger than Rudolph — and is more athletic.

Both would be fine as TE2 if the Vikings make a move to upgrade. Yet, if Irv Smith Jr. misses any time in 2022, relying on Ebron as TE1 is a wiser plan.

Q: I read an article about the Vikings getting hurt by winning the playoff game in 2019. Do you believe that really prolonged the inevitable for Mike Zimmer?

A: No, any theory about the Vikings “hurting themselves” by winning a playoff game is maniacal.

Truth be told, you can take any more moment in human history and say, “It would’ve been better if _____ happened instead.” The talking point is lazy.

The alternative to the Vikings walking off the Saints in 2019 would be to have them lose. And that sounds like cynicism and defeatism wrapped into one.

The Vikings won a playoff game in 2019, got beat the following week, and then struggled with mediocrity for the next two seasons. The theory for next time should be — maybe they should lose this playoff game because we don’t want a false sense of hope with Kevin O’Connell going forward.

Is that how this works?

Q: Is Ezra Cleveland a certifiable and trustworthy starter now? Or is the verdict still out on him at left guard?

A: Cleveland’s Pro Football Focus grade (68.6) was 0.5 below Quenton Nelson from the Colts.

He is a trustworthy starting guard but not a Pro Bowler. Cleveland is also entering Year Three, so he could conceivably take the next step. There should be no mystery about this assignment at LG; Cleveland is the Vikings starting left guard.

Whether he blossoms into stardom is to be determined. But his career, by the numbers, is headed in the right direction.