Picking 53: Vikings Can Only Keep So Many Receivers 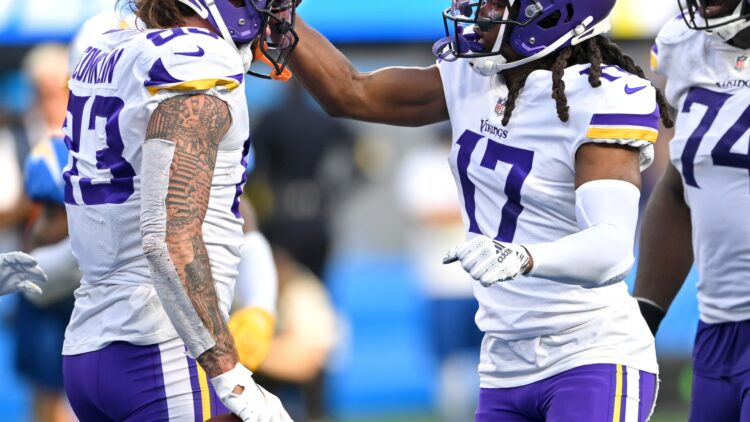 The Vikings have a long history of talented receivers. In 2022, the tradition will continue with Justin Jefferson leading the charge. Minnesota’s third-year receiver, somehow, might become even better. Joining him are Adam Thielen and K.J. Osborn as the main three receivers in the Vikings offense.

From there, the competition will be intense. It’s anyone’s guess who will snag the remaining spots, just as it’s anyone’s guess how many receivers the team will keep. Given that I think five RBs will make the team, I’m leaning toward a relatively modest amount of receivers on the final roster.

Shout out to PFR for the great stats.

Not only will he be the WR1 in Minnesota, Jefferson may prove to be the best WR in the entire NFL. Last season, he had more than 100 catches and 1600 yards. He piled on 10 TDs. His PFF score was an elite 90.1. Gone are the concerns about whether he’ll be able to handle NFL coverage. Jefferson is, without question, the team’s best player.

Joining him is Thielen, the nearly 32-year-old veteran. It’ll be his ninth NFL season. In recent years, his numbers haven’t been up to his usual standards, largely due to some injuries that have kept him off the field. If he can be on the field for all 17 games, Thielen should easily surpass 1000 yards. Expect Kirk Cousins to look for Thielen a lot when the team is in the red zone.

Osborn bounced back from a brutal rookie season to put forth a really impressive sophomore year, resulting in some really nice deep TDs (with a couple examples above and below this paragraph). PFF gave him a relatively modest 64.9 score last season, coming in at 76th out of 115 receivers. Regardless, the on-field production was strong: 50 catches, 655 yards, and 7 TDs.

It’s after the top 3 that things get interesting. A former seventh-round pick, Bisi Johnson missed all of last season. Prior to his injury, he performed reasonably well for Minnesota. He had 31 catches and nearly 300 yards as a rookie, impressive totals given the draft status. His sophomore stats weren’t as strong, but he’s a late rounder, so merely contributing is a win. Recently, the team brought veteran Albert Wilson to town, an indication that they’re looking to increase competition among the depth players.

To my mind, Ihmir Smith-Marsette and Jalen Nailor have the edge for the WR4 and WR5 spots. At the end of the 2021 season, Smith-Marsette impressed. He ran a 4.43 forty, and his speed can help keep defenses from crowding the line of scrimmage. Nailor, for his part, is the lone receiver draft pick of the current regime. That alone ought to give him an edge; draft picks don’t get used unless a team likes the player.

From my vantage point, it makes sense for the Vikings to keep five receivers. The clear-cut top three – Jefferson, Thielen, and Osborn – get included in that group. After the trio, Smith-Marsette and Nailor give Minnesota their five. It’s a relatively young group. Thielen is the only true vet, but Jefferson and Osborn have been through quite a bit in their opening two years in the NFL.

The hope and expectation is that Kevin O’Connell will turn this Vikings offense into one of the league’s most dangerous. To be successful, he’ll need his receivers to collectively distinguish themselves as being among the league’s very best.

Editor’s Note: This piece is part of a larger roster prediction series. The previous pieces have covered QB and RB.