Gleaning Wisdom From the Philadephia Eagles With SI’s John McMullen 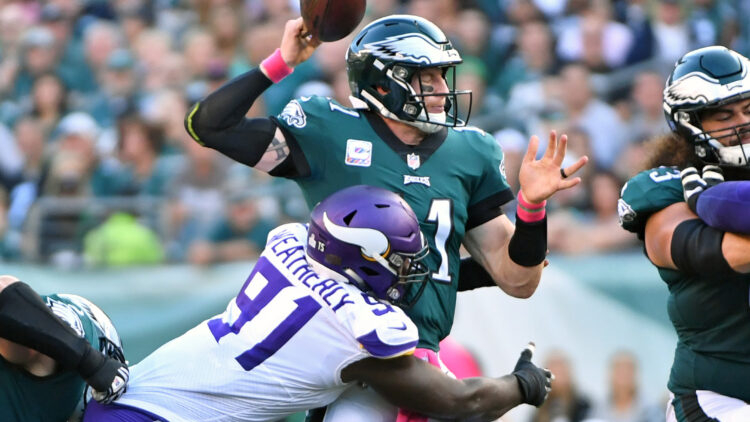 One of the things I enjoy most about this job is the opportunity to speak with really interesting people. Heck, yesterday’s Cut One, Extend One, Trade One piece seemed to resonate with readers, largely because a collection of interesting folks submitted their opinions. Recently, I reached out to Sports Illustrated‘s John McMullen (who you can follow on Twitter), a Philadelphia Eagles writer.

The Eagles finished the 2020 season in uninspiring fashion with a 4-11-1 record. They fired Doug Pederson and brought in Nick Sirianni. Now, they’re a playoff team looking to pull off an upset against Tampa Bay. I reached out to Mr. McMullen to glean insight on what the Eagles did to avoid a full scale rebuild, climbing back into relevance in one short season.

1) Would it be fair to say that the 2020 Eagles had sunk lower than the 2021 Vikings? Obviously, Philly’s record was less than stellar. What was the overall mood among the fanbase?

On the surface but most of the Eagles’ decline was tied to the play at the QB position where Carson Wentz simply fell off the table from a performance standpoint due to multiple issues but most notably his injury history and the historic attrition on the offensive line. The offensive line was back to being a top-5 unit in 2021 and the defensive line remains the strength on that side of the ball. It’s not sexy but if you’re strong up front on both sides of the ball you will have a chance to win games. Minnesota has way better skill-position players than Philadelphia and that’s sexier but the foundation isn’t there.

2) Did most Eagles fans believe that firing Doug Pederson was the right decision? Who were the main names that fans were looking to see as the team’s next head coach?

A lot did which is amazing because he was three years off a Super Bowl win. The Eagles fired Doug later in the process after he wouldn’t acquiesce to organizational ordered coaching changes. He wanted Press Taylor as OC and Matt Burke (or Cory Undlin) as DC and that was not acceptable to Jeffrey Lurie. I don’t think there was a groundswell last year because most of the hot-coaching candidates (Arthur Smith, Robert Saleh and even Brandon Staley) were well along toward getting their jobs when the Eagles entered the picture. Near the end, the focus was on Josh McDaniels but Lurie thought he and Howie Roseman wouldn’t co-exist well in the long term (he was probably right) and was going to keep interviewing people until someone wowed him which turned out to be Nick Sirianni.

The better frame would be 2016 where the Eagles wanted Adam Gase and then Ben McAdoo (some will even tell you Tom Coughlin as well) until “settling” for Pederson. Sometimes it’s better to be lucky than good. McAdoo was on his way down to accept the job when the Giants convinced him to turn around.

3) Building off that, how did people react to Nick Sirianni being the choice? Was there much optimism for a reasonably successful 2021 season? Would it be fair to say that the team pulled off the reload instead of a rebuild?

Sirianni was portrayed poorly by most especially after his introductory press conference where he was clearly nervous. When the Eagles were 2-5 there was a lot of one-and-done talk from sports-talk radio but he was never in danger inside of the organization. Now that the Eagles’ made the playoffs due in large part to a soft schedule he’s regarded by most a the best rookie head coach.

Playoffs or not he deserves that tag for shifting the offense mid-season around the strengths of Jalen Hurts instead of continuing to pound the square peg in the round hole.

4) To your mind, what are the main things that Sirianni has done differently to allow this iteration of the Eagles to get into the playoffs?

His biggest strength is utilizing the strengths of his players something he learned in Indianapolis which had three completely different QBs over a three-year span (Andrew Luck, Jacoby Brissett and Philip Rivers), something that forced Frank Reich and Nick to develop essentially three completely different offenses. Lurie is obsessed with having a top-tier passing offense because he thinks you need that to succeed on a consistent level in the modern NFL and he’s right. As an example of that Pederson went into Lambeau Field and upset the Packers in 2019 by running the football and Lurie asked why they didn’t pass the ball more. Sirianni doesn’t have the weapons for a consistent passing offense right now so he built around his strengths and put together the top running offense in the NFL. It’s not the long-term solution, however.

5) Any final words of wisdom for Vikings fans, a weary and beleaguered group?

I’m a big believer in continuity in the NFL but it was time for Mike Zimmer. I would have kept Rick Spielman, however. The game has changed and I think Zimmer was too dismissive of young players and the shift in coaching staff when assistants like George Edwards and Jonathan Gannon left was the beginning of the end in my estimation especially when you’re elevating your son to co-DC. As for the young players, look at the third-round picks. I have no idea if Kellen Mond, Patrick Jones, Wyatt Davis, and Chazz Surratt can play but I do know they have traits that can’t be utilized and it was coaching malpractice to essentially redshirt them all.

As for the next coach and GM they have to get the OL right first and the DL back to being the strength that has always been a Minnesota staple. The fact that the Vikings have put so many assets into the OL and still can’t block on far too many weeks also points to coaching issues. Philly’s O-Line coach, Jeff Stoutland, develops offensive linemen as good or better than any other OL coach in the NFL. Too many fans think you draft a player and that’s it. The lack of development of Minnesota’s offensive line over the years has been very troubling.

Editor’s Note: Purple PTSD extends a sincere thanks to John McMullen for taking the time for this interview. If you feel so inclined, you can follow him on Twitter and find his work over on Sports Illustrated.