Double Duos Needed for Vikings to Break Through in 2022 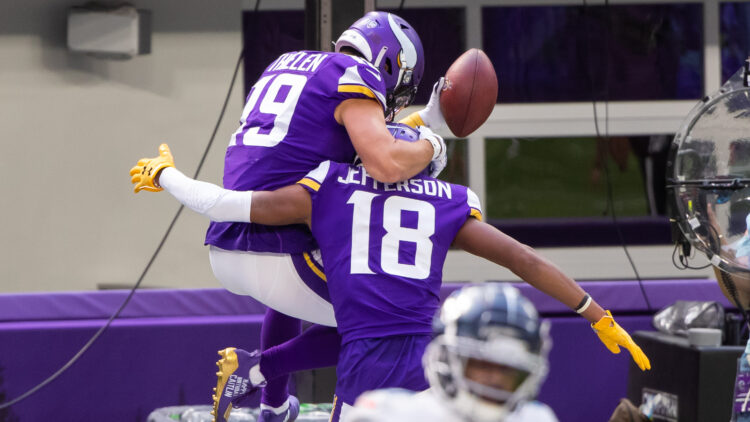 By this point, you’ve likely read a fair bit about Danielle Hunter and Za’Darius Smith. There has also been a lot of discussion about Justin Jefferson and Adam Thielen. If both pairs remain healthy, the Vikings will feature two dynamic duos.

I started thinking about this topic when I saw that PFF put together a piece considering the NFL’s top offensive and defensive duos. Minnesota’s impressive WR pair finds itself on the list:

Jefferson’s elite impact during his young NFL career has been undeniable.  He’s garnered the Vikings’ best offensive grade his first two seasons while possessing the third-highest 2021 WAR figure among receivers (1.16). Thielen missed four games last year while finishing with his lowest receiving grade since 2015, but he is only two years removed from an 87.9 receiving grade. If the two wideouts can achieve excellence at the same time, their offensive impact can elevate the Vikings to playoff contention.

Finishing off the other offensive duos are Ja’Marr Chase & Tee Higgins, Deebo Samuel & George Kittle, Davante Adams & Darren Waller, and Mike Evans & Chris Godwin. It’d be hard to quibble with any of the inclusions. The Vikings duo is rightly recognized alongside some of the game’s other great pairs.

Unsurprisingly, the Vikings defenders don’t get mentioned in the defensive portion of things. Both have battled serious injury in recent seasons, so it’s easy to overlook them.

As a team, Minnesota is mostly flying under the radar. Very few would put them among their top contenders. In fairness, the Vikings have done very little these past couple seasons to convince others they’re anything other than average. There certainly is some optimism among the purple fans, but I can’t fault the broader NFL fanbase for failing to jump on the bandwagon.

The solution is simply to play excellently in 2022. No one thought the Bengals were heading to the Super Bowl at this time last year. All they did was go out and prove nearly everyone wrong. The Vikings will be looking to do likewise.