Another Modest Ranking for Minnesota’s QB1 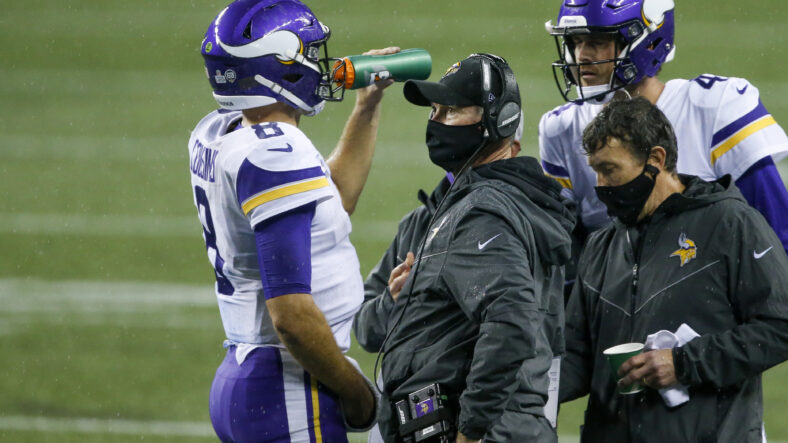 Mike Sando recently published his QB ranking, a piece that relies on the opinion of 50 NFL coaches and executives. Predictably, Minnesota’s QB1 gets a notable ranking.

First, though, a few words on the methodology. Sando offers a more detailed breakdown:

The full 2022 Quarterback Tiers results are below for every veteran starter. The results reflect voting from 50 NFL coaches and executives, including six general managers, eight head coaches, 10 evaluators, 12 coordinators, six quarterback coaches and seven execs whose specialties include analytics, game management and the salary cap. The remaining ballot was put together by four members of one team’s personnel department.

Coming in at #1 overall is Aaron Rodgers, the longtime Green Bay Packers QB. I’d certainly lean toward Patrick Mahomes, but I didn’t get a vote. It’s Mahomes and then Tom Brady who finish off the top 3.

Tier 2 QBs arrive after the initial six players. Matthew Stafford, the most recent Super Bowl winner, is leading this section. Readers looking for Kirk Cousins in the second tier will need to scroll all the way down to the next section. He comes in below Dak Prescott, Kyler Murray, Matt Ryan, and Derek Carr (among others).

Tier 3, per the piece, consists of players who can’t carry a team: “A Tier 3 quarterback is a legitimate starter but needs a heavier running game and/or defensive component to win. A lower-volume dropback passing offense suits him best.” At the top of this section is Minnesota’s QB1. Overall, he is the 15th QB listed. The piece depicts Cousins as the ultimate Tier 3 player:

If there’s ever a Tier 3 Hall of Fame, Cousins might get the first bust. In the past six years Cousins was first in Tier 3 twice, second twice and fourth another time. He was also the final quarterback in Tier 2 one year. His average vote this year (2.72) is within a hundredth of where he stood twice previously.

Cousins is consistent. The article goes on:

Voters referenced former Vikings coach Mike Zimmer’s open disdain for Cousins as a factor working against the quarterback. The partnership with O’Connell can only be better.

“People want more, but guess what, he is a pretty damn good player,” an offensive coach said. “Now he is going to be in an offensive-oriented system where guys like (Jared) Goff and Stafford have had success. People don’t like him because they knock his leadership or his contract, but the reality is, there is no one younger that you would want over him that you could get through the draft or trade — (Sam) Darnold, (Baker) Mayfield, those guys.”

The debate about Minnesota’s QB1, quite evidently, is alive and well. Fans, writers, and NFL employees can’t reach much of a consensus beyond the belief that Cousins is good but far from elite. Whether that’s given a positive or negative spin is often left to the individual commentator.

At this point, my opinion is that Cousins is, in fact, a strong NFL starter. The issue is that his contract suggests he’s more than that. I believe the team will have a very difficult time competing with so much cap space devoted to their QB. That being said, I’d be thrilled to be wrong. My hope is that Cousins undermines all the doubt and criticism, firmly establishing himself as an All Pro QB who leads his team deep into the playoffs.