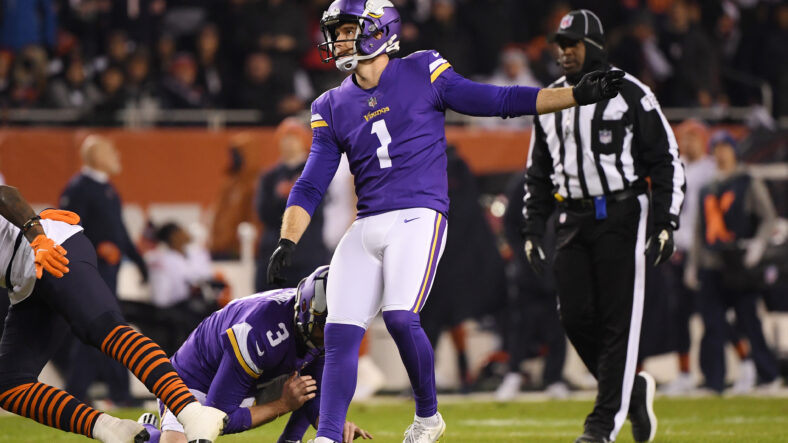 This one is prompted by a question Sam asked on the most recent episode of Notes from the North (which comes out tomorrow). The question focused on areas on the roster where I’m most interested in seeing how the competition works out. The QB1 battle and WR competition was thus of little consequence. We know who the starting QB will be, just as we have a pretty strong idea of who will lead the Vikings at receiver. It’s the more uncertain positions that offer more intrigue.

The point of this piece, folks, isn’t to provide an exhaustive look at the upcoming training camp battles. Rather, it’s merely to highlight a handful of important spots that have some uncertainty. The list below isn’t arranged hierarchically. It’s merely a list of competitions we can follow as training camp gets going.

Greg Joseph, if things proceed as expected, will be the Vikings’ kicker in 2022. He’s coming off a reasonably strong season where he hit more than 86% of his FGs and 90% of his XPs. Currently, he’s not facing any competition. If he struggles, though, Kwesi Adofo-Mensah may look to add someone to create a more direct competition. This battle – if we can call it that – currently consists of Joseph ensuring he doesn’t do so poorly that the GM feels compelled to add someone else.

Extra Reading: Will Kicker be a Weak Point?

I’ve got my money on Chris Reed. The veteran offensive lineman will be doing his utmost to ensure he snags that spot over Jesse Davis and Wyatt Davis. Based on the PFF grades, Reed offers the strongest play. Coming from the Colts is also encouraging given that Indy has such an impressive OL. Whoever wins the job will get to partner with Brian O’Neill along the right side.

I’m nervous about heading into the season with only Danielle Hunter and Za’Darius Smith as the proven pass rushers. If healthy, both will likely put forth strong seasons. However, an injury would force the Vikings to lean on some unproven depth. D.J. Wonnum is the frontrunner for the OLB3 job, though there are some FAs to consider to solidify the depth.

Extra Reading: Do The Vikings Have Enough Pass Rushing Depth?

The Vikings find themselves in a good spot when it comes to safety, making the position one of the most intriguing competitions of training camp. Kwesi Adofo-Mensah’s first ever draft pick as a GM is Lewis Cine. Camryn Bynum is coming off a rookie season where he didn’t receive a ton of opportunity but was promising when he did get a chance. Of course, the leader of the group is Harrison Smith, who is still one of the best safeties in the NFL. Who gets the chance to start alongside Smith?

Extra Reading: Can Harrison Smith Get Back to Elite?

Kellen Mond and Sean Mannion are competing for the backup spot. Mond – a third rounder from the 2021 draft – certainly has more upside. The belief is that Mannion is around since he helps Cousins to prepare and study. To my mind, having a QB2 with more upside makes the most sense since that player gives the team a shot at winning if the starter misses time. Alas, I’m not in charge of the purple personnel. We’ll see what K/O and the rest of his staff decide.