Chris Herndon Will Have a Productive Year as a Viking 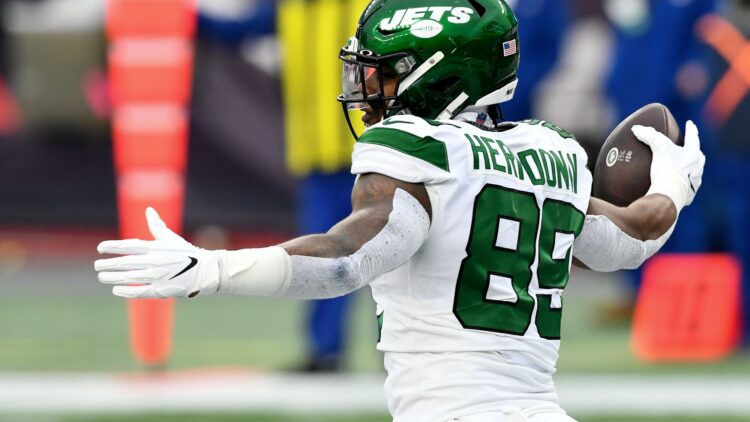 Following the news that Irv Smith Jr. will likely miss the year with a meniscus tear, the focus has now turned to the likely Chris Herndon/Tyler Conklin duo at tight end. The Vikings were already lacking experience in this area, and with their budding star out, they now need to rely on some relatively unknown faces this year.

Herndon is easily the most proven player in this room, but even he had some big struggles last we saw him in New York. After a solid 2018 rookie year, a DUI, injured hamstring, and chest rib fracture kept him sidelined for all but one game in 2019. Then, 2020 got off to a very rough start with a lost fumble in the opening week, and three drops in the first five games (per Pro-Football-Reference).

After a very shaky start, Herndon seemed to wake up and get back to his old, productive ways. In the final three games of the season, Herndon recorded 14 receptions, 145 yards, and two touchdowns. He was extremely efficient as well; only three of his targets did not go as receptions for a catch rate of 82.4%. To compare, in that same stretch of games, Irv Smith had 11 receptions, 120 yards, and two touchdowns with a catch rate of 68.8%.

Obviously, Vikings fans are going to be bummed that Smith is going to miss this season. They should be; it looked like 2021 was going to be his year to show out. However, let’s not pretend that Herndon is a scrub. He may ultimately not have the upside that Smith has as a receiver, but there’s plenty that he brings to the table, and ultimately, Herndon could have his own breakout year in the Vikings system.

I don’t think it can be overstated how much leaving New York will mean for Herndon. Especially when you consider the state that the Jets were for the majority of his tenure there, this is huge for him. Look at his 2018 season compared to the past two, and I think there’s a clear connection.

In 2018, Todd Bowles, someone I think (or hope) most people would consider to be a fairly competent NFL coach, was the head coach for the Jets. Herndon thrived, Sam Darnold looked decent, and while the offense was still young and flawed, they scored at a better clip (20.8 PPG) than in 2017 (18.6 PPG). They were improving.

Then, the Jets fired him because I guess 4-12 wasn’t good enough with a new rookie QB under center. In his stead, they hired (gulp) Adam Gase. Gase’s Jets went 7-9, but that was mostly because their defense was great. Meanwhile, the offense’s production plummeted, and the Jets ranked 31st in scoring and 32nd out of 32 in total offense. We all know what happened in 2020 when everything completely fell off the rails, and the Jets failed so hard that they couldn’t even tank correctly, losing out on a chance to draft Trevor Lawrence.

Despite all that, Herndon still looked competent as a receiver down the stretch of the season. Surely, going to Minnesota in an offense that features Dalvin Cook, Justin Jefferson, Adam Thielen, and an actual structure will be beneficial to him. Say what you want about Kirk Cousins, but I certainly have more confidence in him as a QB than I do Sam Darnold. Best of luck to Darnold though as he’s also escaped the black hole that is the New York Jets for greener pastures in Carolina.

While Smith was essentially expected to be WR3 for the Vikings in 2021, they could not expect to get much in terms of blocking from the third-year tight end. However, even if Herndon does not prove to be quite the receiver that Smith is, he runs laps around Smith’s blocking abilities. Per PFF, he led tight ends in pass blocking snaps, allowing just four pressures with one sack, one QB hit, and two hurries and earned a grade of 76.1.

This makes him a very valuable commodity for a Vikings offense that has struggled in pass protection essentially ever since Cousins took over as QB. Obviously, Cousins is not a great enough QB that he can be extremely effective without an offensive line to protect him, but when he has had that time to throw, he’s a solid starting QB. Adding one of the better pass-blocking tight ends should be a step in the right direction for the Vikings.

This is where we expected Smith to earn the majority of his production, and while it may not be to the same level, we should expect a very similar target percentage for Herndon in this area of the field. It may also be closer in terms of production in this part of the field than we think. This is where the production between the Vikings offense and Jets offense has a stark difference.

Kirk Cousins was one of the best red zone QBs last season, with his 25 passing TDs ranking sixth in the NFL. Granted, 13 of these went to Adam Thielen, but six of the remaining 12 were caught by either Smith or Kyle Rudolph. Those 15 targets likely get pumped to Herndon now. Sam Darnold and Joe Flacco on the other hand, threw a combined eight touchdowns in this area of the field. They also struggled just to complete passes in this area of the field, throwing for a combined 16/41. Meanwhile, Cousins completed 37/62.

Not only were the Vikings way more efficient passing in the red zone, but this stat just shows that they did it more often too. Cousins averaged nearly four passes per game in the red zone. If Herndon, gets just a few of those, his production will skyrocket.

No, I don’t think Herndon is as good a receiving tight end as Smith. Yes, the Vikings will still miss Smith being on the field. However, Herndon has probably about as much upside as the Vikings were going to get given what was available. Zach Ertz looks recommitted to Philadelphia, and Tyler Eifert’s injury history makes him just as big a risk if not more so. Herndon still has youth on his side, so his game could continue to grow while playing for a competitive team.

Finally, we haven’t even mentioned Tyler Conklin in this piece. If nothing else, Herndon just needs to be a nice complement to Conklin at the position. The Vikings already got to see what Conklin could do down the stretch of 2020, and if they can get something similar to the locked in, 2018 version of Herndon that caught 39 passes for 502 yards, they will be just fine on offense.