The Vikings Have a Center Conundrum 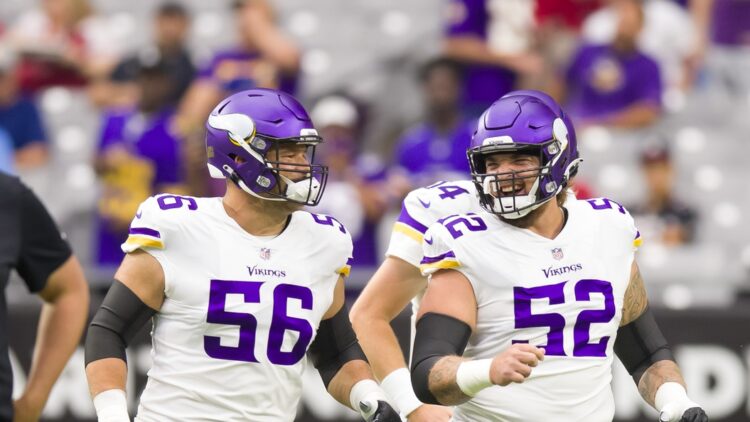 It’s long been evident that Garrett Bradbury isn’t the solution at center for the Minnesota Vikings. The harsh reality is that he’s a bust. As a result, many fans were looking for the team to fully switch to Mason Cole. On Sunday, though, Cole got bullied by the Packers. In fairness, Kenny Clark is an absolute monster at NT; I’d have a hard time believing he isn’t one of the most underrated players in the NFL. In any case, the broader point for the purple is that the path forward at center isn’t quite as a clear. What should the team do against the 49ers?

What Should The Minnesota Vikings Do at Center?

Take a peak at Clark repeatedly disrupting the Minnesota offense by getting instant penetration up the middle:

Folks, this is the sort of thing that just can’t happen. The Vikes, somehow, found a way to still put up 34 points even with this issue. Keep in mind, though, that this kind of protection isn’t sustainable. Klint Kubiak deserves a ton of credit for still making the offense work even with the issues the Minnesota Vikings were having at center.

The Vikings had a convenient excuse heading into the Packers game when it came to who would start. During the game broadcast, the announcers said that Kubiak decided to roll with Cole because Bradbury was off for two weeks and still getting his conditioning back. The coaching staff won’t have such a convenient excuse in Week 12. They need to actually choose someone.

What should they do?

Frankly, it doesn’t appear like there is a totally satisfying answer to that question. Cole’s PFF pass blocking score is a dismal 30.3; Bradbury’s is a slightly-less dismal 36.0. Neither appear to be great options in the passing game. To his credit, Kubiak helped his center by moving Kirk around and by getting the ball to the edges. He’ll need to continue to do so. They might also look to change up the snap count more to get the NT thinking a little bit. The more a defender thinks, the slower he plays. Otherwise, there may need to be more double teams and possibly some wham blocks.

Another factor to consider is overall offensive identity. Bradbury moves as well as any center in the league. He can reach block and he can get out in space to block for screens. It’s possible Minnesota will see those abilities and conclude that he better allows them to run their offense. Remember: the coaching staff’s goal isn’t to have the best individual player but the best version of the offense. It’s a subtle, yet important distinction. More often than not, those two things don’t contradict: the best player allows for the best version of the offense. It isn’t always the case, though.

Folks, what would a season be without at least a few concerns about the OL? Brian O’Neill is a stud and Christian Darrisaw offers good reason for optimism. Right now, the Minnesota Vikings should be most concerned about the iOL, especially center.

The 49ers don’t have an interior linemen who will be as explosive and powerful as Kenny Clark. Few teams do. Nevertheless, Minnesota will be looking for a stronger performance at center. Arik Armstead is a good player, and don’t be shocked if the 49ers get Nick Bosa along the interior for a snap or two. There’s a reason why I’m not an NFL DC, but this one seems obvious to me. If the Vikings are in 3rd and 15, I’m putting Bosa in the middle. Why wrestle with O’Neill or Darrisaw if you can instead wrestle with Cole, Bradbury, or Udoh?

The Vikings will need to have a solution.