Christmas Shopping For The Minnesota Vikings 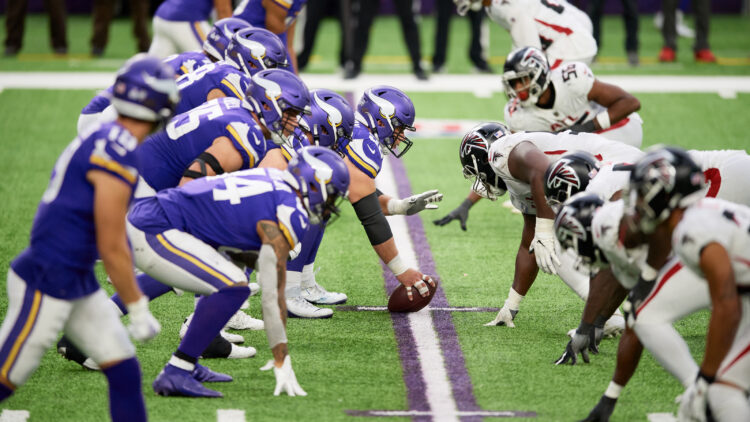 MINNEAPOLIS, MINNESOTA - OCTOBER 18: The Minnesota Vikings offense lines up against the Atlanta Falcons defense during the game at U.S. Bank Stadium on October 18, 2020 in Minneapolis, Minnesota. (Photo by Hannah Foslien/Getty Images)

As Christmas draws near, many Minnesota Vikings fans want nothing more than a purple playoff birth. Several others are on the more pessimistic side, making a push for an end-of-season dumpster fire to ensure the team gets new leadership. Since Christmas is about the eternal hope that flows from Christ’s arrival, I’ll be keeping things along the glass-half-full side of Vikings fandom.

Included below is a list of five things the Vikings are hoping to get from Santa. If you think there are some I’ve missed that ought to have been included, let me know on Twitter.

The offense put together 36 points, so casual onlookers may have believed he played well. Quite the opposite was true. He wasn’t disastrous, but he was below average. Dalvin Cook was sensational (the exact opposite of what I predicted). The team was therefore able to survive the late-game Pittsburgh push largely because their RB1 did superhuman things.

At the beginning of the third quarter, the Vikings had a shot to finish off the Steelers. Twice they marched down the field. Twice they came away with field goals. Turning the 6 points into 14 points would have saved us all a lot of stress.

On MNF, Kirk will need to deliver the knockout blow when he gets the chance. Developing a killer instinct is precisely what this Vikings team needs.

The Vikings added Anthony Barr, Eric Kendricks, Dalvin Cook, and Patrick Peterson to their Week 14 roster. They still hope to get Adam Thielen, Christian Darrisaw, and Cameryn Bynum back into the fold. Having the complete collection of talent will make their season considerably more enjoyable.

Fans captured a small glimpse of what this team is capable of during the Pittsburgh game. The front seven was too much for the Steelers to handle in the opening 2+ quarters of the game. Pierce looked powerful and nimble; Barr & Kendricks allowed Zim to disguise things to keep Tomlin’s squad guessing. Just imagine if Danielle and Griff weren’t hurt.

Having Thielen and Darrisaw back in the offense would make things pretty dynamic. Blake Brandel may have found his role as the extra linemen, and the Justin Jefferson emphasis ought to continue. Dalvin looked as good as he has all year. Heck, the Mason Cole at RG experiment may be exactly what the team needed, especially since Garrett Bradbury has put together consecutive strong performances (and that’s after a certain person said he was done).

Week 3 against the Seahawks. That’s the only game that hasn’t been decided by a single score in Minnesota’s 2021 season.

Vikings fans deserve less stress for Christmas, especially if it’s because Minnesota is running up the score on their way to wins.

There’s isn’t too much more to be said here, folks. The only thing I’ll add is that Zim looks tired. The man could use less stress in his life, as well.

The Minnesota Vikings are surely looking for this Christmas gift as much as any fan.

Zim was outspoken about his disappointment in his corners during a recent press conference. It’s easy to see why. So much of the issue rests in simple, avoidable mistakes. Playing inside shade, being at the proper depth, and doing a proper job in pattern-match coverages make all the difference.

As I recently explained, the corners outside of Patrick Peterson have been awful. It’s possible that Zimmer needs to simplify things so he can get Cameron Dantzler onto the field. It’s clear that Breeland is a horrible option, and yet he continues to start. It must be that he has a better understanding of his responsibility on the field; his actual play can’t be the reason.

Now, Dantzler made an inexcusable play that allowed the Lions to pull off the upset victory, so I can understand Zim’s hesitation here. All I’m saying is that a talent infusion is a rare thing in Week 15 of the NFL season. Is there someway for Zim to get Dantzler onto the field? Making things simpler might be the key.

Greg Joseph has been a good kicker. At various points clutch, Joseph has stabilized a position of need for bottom dollar. Fans ought to be thankful for him.

One area of concern, though, is the extra point kicking. When the journeyman lines up for the single, many fans are nervous about what will transpire. At this point, who can blame them? Joseph has missed 4 extra points so far this season. He has missed three over these past four games. A single point, of course, isn’t the be-all-end-all of NFL football. Nevertheless, our purple friends commonly find themselves in extremely close games. Every point matters.

If Santa finds a way to put these five things under my tree, I’d indeed be a very happy lad. One can hope.