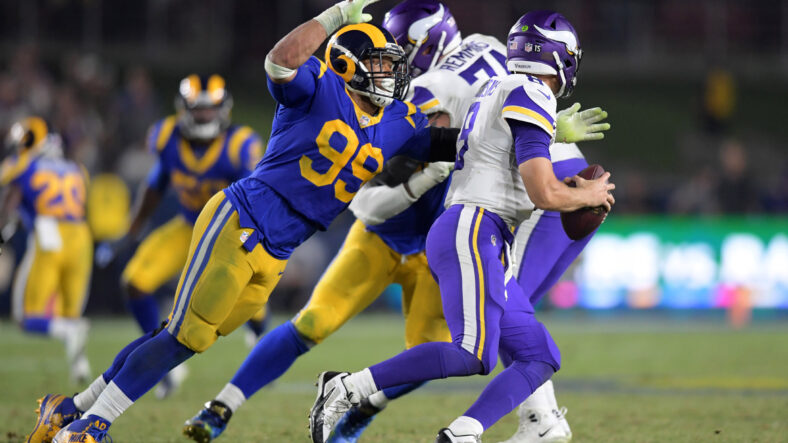 Usually, week 17 would mean we are wrapping up the NFL season, and we’d be seeing multiple stars sitting in preparation for the playoffs. In 2021 though, we have an additional week of games, which means many of these games in week 17 have major playoff implications among division rivals. Before we watch those matchups take place though, we need a new list of NFL power rankings. Here is the updated list as we head into 2022.

It’s been a strange ride for the Kansas City Chiefs in 2021, but they have found their way to their usual spot atop the NFL power rankings. This comes on the heels of a demolition of the Pittsburgh Steelers last week where Patrick Mahomes looked every bit like his usual MVP self, and the defense dominated.

Aaron Rodgers broke Brett Favre’s franchise record for passing touchdowns by throwing three more on Christmas Day, and the Packers got a close win over Cleveland at home. Green Bay’s defense forced four interceptions out of Baker Mayfield, including one on a last-minute attempt to win the game.

This wasn’t an outstanding performance by the Colts on any front, but it was solid on all fronts. Jonathan Taylor broke off his usual big run, but was held in check other than that. Carson Wentz tossed a couple TD passes, but wasn’t great other than that. The defense kept Kyler Murray and Co. in check. All in all, it was another impressive win for a team that is peaking at the right time.

Matthew Stafford did not play well at all in his first game against the Vikings since leaving Detroit. This has become typical for Stafford, who is now 9-13 against that team. However, the Vikings didn’t play well either, especially on the offensive side of the ball. A lot of that had to do with the impact of Aaron Donald and Jalen Ramsey, who made their presence felt on nearly every drive.

This was a big statement win for a Buffalo Bills team that is still fighting not only for the AFC East crown, but just a general playoff spot. This victory puts them firmly in position for both, assuming they can close the season out strongly against the Falcons and Jets.

It might be disgruntling for Cowboys fans (if there are any here, shout out to you) to see their team blow out a division rival by 40+ points and not move up in the power rankings. That said, this is just not a very good Washington Football Team to begin with, and they’re worse after coming off a massive Covid outbreak. The only surprising thing about this game is that the NFL didn’t flex it out of prime time.

With this win, the Tampa Bay Buccaneers have officially taken the NFC South crown for the 2021 season. This is a physical team, and that trait won the day once again. Their run defense was stifling while they used their own running game to eat away the clock. They should be able to cruise again this week against the Jets.

If a couple things go differently in this game, the Patriots easily could’ve been the team to come out on top. Mac Jones had one of his worst games of his rookie year though, and New England just couldn’t overcome those flaws. They should be able to get back on track this week against Jacksonville.

After a rough stretch in which Tennessee lost three of four games, the Titans came out on a short week and got a very gutsy win over a very good 49ers team. The defense forced a pair of Jimmy Garoppolo interceptions, and Ryan Tannehill was able to lead a last second field goal drive to win the game, capped off by a 23-yard scramble.

Cincinnati was able to ride a historic Joe Burrow performance to a big win over the Baltimore Ravens. The second-year QB passed for 525 yards and four TDs en route to a blowout over their division rivals. Not only was it a confidence booster, but it gives Cincinnati the lead in the AFC North going into their heavyweight matchup with the Chiefs.

Arizona’s slump continues. The Cardinals have now lost three games in a row and four of six. Since the bye, this has not looked like the same team that started the season 7-0, and Kyler Murray’s performances have been a big reason for that.

Jimmy G didn’t have a great game on Thursday night, and the Niner defense just didn’t make enough plays down the stretch against Tennessee. San Francisco is a good team, but it feels like they needed this win to carry any confidence going into January.

The Tua Tagovailoa and Jaylen Waddle connection was strong for the Dolphins on Monday night. Additionally, their defensive front took advantage of New Orleans’ Covid issues all over their team, absolutely demolishing their offensive line.

This is where things start to get weird. The Eagles are very quietly sneaking their way into the playoff picture, especially with San Francisco’s loss. Philly has now won five of their last six games, including this most recent dominant performance by Jalen Hurts’ offense. Next week should be another win against Washington.

Justin Herbert played a decent game against the Texans, but it was the Chargers defense that couldn’t hold up. Davis Mills tore the secondary apart all afternoon, and Rex Burkhead looked like Austin Ekeler running all over the place. LA now needs to win out in order to keep their playoff hopes alive.

Tyler Huntley was ruled out for this game, so it was the Josh Jackson show for the Baltimore Ravens. It wasn’t awful given the circumstances, but an incredible Joe Burrow game took away any juice that Baltimore had going into this one.

The undead Raiders just refuse to go away. This week was another close win against the Denver Broncos to keep themselves alive in the AFC playoff race. Do they have the chops to go into Indy and beat the MVP candidate Jonathan Taylor though?

Mike Zimmer’s pass defense was very good in stretches of this game, but Minnesota’s offense just couldn’t get anything going for much of their matchup with LA. Jalen Ramsey held Justin Jefferson in check for the most part of 3.5 quarters, and with no Dalvin Cook plus a weakened Adam Thielen, that limited any explosiveness for the Vikings.

One last time, I am pleading for Case Keenum. Baker Mayfield apparently said this was the best he felt going into a game in weeks, and then he proceeded to throw four interceptions plus a couple more balls that should have been picked off. Surely Keenum is better than that.

Najee Harris was unable to break off any explosive plays against a suddenly stifling Kansas City defense, and Ben Roethlisberger wasn’t able to make plays to other players. Additionally, this season looks like it has worn on T.J. Watt more than others, and it has majorly affected the Steelers defense.

The New Orleans Saints found themselves in quite the Covid conundrum this week, with 22 players and four coaches missing this game, including both Trevor Siemian and Taysom Hill. Because of that, rookie QB Ian Book made his first NFL start, and well, it didn’t end well. The Saints took a loss, putting their playoff hopes in serious jeopardy.

The stars aligned for the Texans in this game against the LA Chargers. Davis Mills played easily the best game of his rookie season while Rex Burkhead scored a pair of touchdowns and rushed for 149 yards. This was pretty much a best case scenario for Houston, but we’ll see if they can carry any momentum into San Francisco.

Yet another loss for a Denver Broncos team that has severely struggled to string any offense together. They managed just 158 total yards of offense this week against the Raiders, and those struggles will likely continue against the Chargers; a team likely looking for a statement win after their loss to Houston.

The Bears showed off their clutch gene, and none other than Super Bowl MVP Nick Foles was the catalyst. Foles led a last-minute touchdown drive to bring Chicago within one point, and then a successful two-point conversion sent the Bears home with a W.

A Covid outbreak among the Washington locker room sent the team scrambling for replacement players this week, and it clearly didn’t work out well. Dallas sprinted past the Football Team from the very beginning of this game and never looked back.

It got dicey at the end, but Atlanta was able to pull out a win against the Lions. Tim Boyle threw an interception on the goal line to Dante Fowler, giving the Falcons another victory to keep their last gasp of playoff breath alive.

Despite this week’s loss, it’s become clear the Kardiak Kitties are putting some things together down the stretch of the 2021 season. They very nearly pulled off an upset in Atlanta with backup QB Tim Boyle, and the defense has been playing ferociously. Lions fans should be excited for the future with Dan Campbell.

Russell Wilson has not been remotely the same player since his finger injury earlier this year. That was part of the problem once again this week, but ultimately, the fact that the defense was unable to find an answer for Nick Foles put this game away.

Zach Wilson was a highlight reel for much of this game against the Jaguars, and their defense was helped out by a James Robinson injury. A fourth-down stop on the goal-line secured the win for New York.

Sam Darnold returned to the field this week after yet another benching of Cam Newton, but he didn’t prove to be much more effective. Matt Rhule’s QB rotation on a weekly basis does not appear to be working, and it’s consistently led to losses.

Mike Glennon and Jake Fromm split snaps at QB, and Saquon Barkley averaged about two yards per rush. That pretty much sums up how bad the Giants offense was in Philadelphia this week, and the defense really wasn’t any better.

The Jaguars lost James Robinson to an Achilles injury early in this game, and they certainly could have used him when they were trying to punch the ball into the end zone at the end of the game. In the end, they maintain their position atop the draft order.