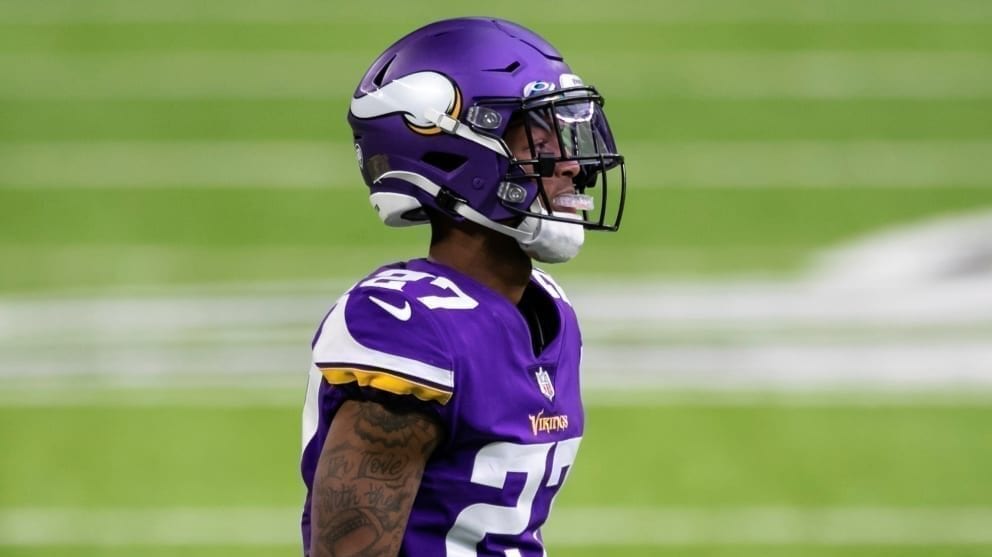 Minnesota Vikings cornerback Cameron Dantzler (27) looks on in the first quarter during an NFL football game against the Atlanta Falcons, Sunday, Oct. 18, 2020, in Minneapolis. The Falcons defeated the Vikings 40-23. (AP Photo/David Berding)

It’s a full Minnesota Vikings news roundup to begin the offseason. There is plenty going on in the league, which is reflected in this crammed-full post. With that said, here is what you need to know to be up to date for our Minnesota Vikings.

Pro Football Focus was complementary of Justin Jefferson, and for good reason. He finished as their clear choice for the top receiver on the PFF All-Rookie Team: “There was no easier selection on this team than slotting in Jefferson at wide receiver. Not only was he the best rookie wide receiver in the NFL this season, but he was one of the best receivers in the league … period.” Cameron Dantzler also made the list, largely due to his strong second half: “After returning to the field in Week 11, he earned a coverage grade of 83.9 while allowing a passer rating of 41.9 on passes into his coverage.”

The PFF NFL All-Pro team has three Vikings on the second-team: Dalvin Cook, Jefferson, and Eric Kendricks. Keep in mind that Cook missed two and half games, whereas Jefferson didn’t start his first two weeks. Given how close the race was in PFF’s ratings, perhaps these extra two games would have propelled them into the top spot at their positions. Similarly, Kendricks was the runner-up, but he also missed significant time due to injury.

Only one Viking made the actual All Pro team: rookie phenom Justin Jefferson. He is on the second team. There is good reason to believe that Jefferson will only keep improving.

The free agent lists have begun. For the most part, the Minnesota Vikings are being overlooked. Look, we get it: the Vikings don’t exactly have a ton of cap space. As we’ve discussed at various points, though, the Vikings have several avenues to create space, including cuts, restructures, and extensions. We’ve offered a few thoughts on who the Viking should consider. One other name to consider: Shelby Harris. He is an underrated DT who could make a big difference, especially for the pass rush. His contract was less than $3 million last season.

In a move that should surprise no one, Mike Zimmer will not be renewing Marwan Maalouf’s contract. Gary Kubiak is still debating whether he wants to return. It seems that health is a major factor. Otherwise, the most notable news is that Dom Capers will not be back after his contract expired. Mark Uyeyama, the Director of Competition Development, will also depart because his contract has ended.

Overall, the Vikings enter the offseason with fourteen free agents. Ten are unrestricted and four are restricted. The most notable are Eric Wilson and Anthony Harris. Both are unlikely to return.

Several young players have been signed to contracts:

Otherwise, perhaps the biggest news is that we know who the Vikings will play next year. It looks like a tough schedule. The six divisional games are always tough, but it’s the other ones that really stand out. They take on the Steelers, Rams, Seahawks, and Browns at U.S. Bank Stadium. They take on the Ravens, 49ers, and Cardinals on the road. All of these games will likely be difficult.

Let’s end on some good news. Jared Allen, who is an all-time great edge rusher, has been nominated for the Hall of Fame. It’s a well-deserved honor. He has previously said that he will go into the HOF as a Viking.

Kirk Cousins won NFC offensive player of the week for his performance against the Lions. It’s relatively meaningless in the grand scheme of things, but it’s always nice when a key player receives some recognition.

That’s all we’ve got for your Minnesota Vikings news roundup, folks. Hope everyone is doing well and staying safe.