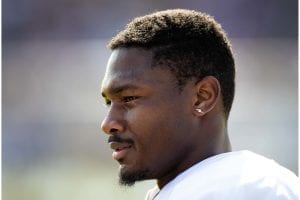 For Minnesota Vikings fans things couldn’t have gone much worse Saturday as the Green Bay Packers topped the Los Angeles Rams on their way to the first NFC Championship game at Lambeau Field since drafting quarterback Aaron Rodgers. Then, the Buffalo Diggs topped the Baltimore Ravens in a windy night in New York.

Both teams struggled with the wind all night, although it didn’t stop former Vikings receiver Stefon Diggs from another 100-yard affair (he ended with eight grabs for 106 yards and a score). The biggest plays in the game both came in the third quarter as Bills corner Taron Jackson returned a Lamar Jackson interception 101-yards for a touchdown. That increased the Bills’ lead to 14 points (with the final score being the same).

On the next drive Lamar Jackson ended up in concussion protocol and thus out for the remainder of the game, killing any chance the Ravens had at a comeback. He was was replaced by Tyler Huntley.

While stifled in the run game, Bills QB Josh Allen had an okay game going 23-for-37 with 206 passing yards and the touchdown.

While they’re now in the AFC Championship Game for the first time since the early 90’s, the Bills haven’t exactly blown out their opponents this post-season. They won a nail-biter against the Indianapolis Colts, a game that could’ve been different had the Colts elected to kick a field goal before the half.

Now, despite the wind, they also didn’t blow out the Ravens and one could argue that things may have been different has Jackson not left when he did (although the Ravens’ offense couldn’t muster anything before he went down, to be fair).

The Bills will need to play their best next weekend against, most likely, the Kansas City Chiefs. The Chiefs face the upstart Cleveland Browns tomorrow at home, and would be in the AFC Championship for the third year in a row if they can hold off a Browns team that decimated the once seemingly unbeatable Pittsburgh Steelers in the Wild Card round.

That having been said, Diggs seemed elated after the game when interview alongside Josh Allen, saying how much he loved Allen. Meanwhile, Vikings fans watched the Packers win, Diggs feel validated, and will most likely watch the Saints top the Bucs tomorrow. Ugh.

That means that if the Browns upset the Chiefs, Vikings fans will have something to get frustrated about from every single remaining team. The Browns hired Kevin Stefanski from the Vikings last off-season, and considering how the season went he is looking like the one that got away.

So… Stefanski/Browns reminding us of our mistakes? Check. The Saints just being the worst? Check. The Packers? Check. Diggs and Bills? Check.