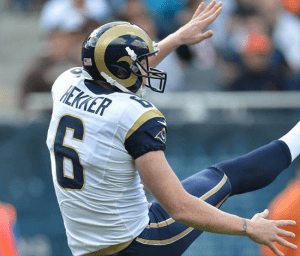 Punters simply cannot be evaluated by simple distance alone. We’ve known this for a while, but national media still cites net yards or touchbacks (as a positive?!) constantly. For the third year in a row, I’ve taken the punting data from 2017 and parsed it in a more useful way. Here’s last year’s, with 2015’s results embedded into it. For more on the methodology and why things are the way they are, check that out. But very briefly:

Short field punts (from your own 40 and closer) are measured as a percentage of the field they cover. So a punt from the 50 that’s fielded at the 10 is an 80% punt, as it covered 80% of the available field. Long field punts (everything behind your own 40) are simply measured as average distance, since those are the times you’re trying to boot it as far as possible. Touchbacks are a -20 yard penalty for obvious reasons, and blocked punts are removed.

Punters are ranked by a combination of these measures, weighted toward long-field punts since they’re more common.

Shane Lechler gets this year’s punting title with the 2nd strongest leg and pretty good short accuracy as well. You could make the argument that Marquette King deserves the title over Lechler if you think short field pinning is more important than long range field-flipping.

Matt Bosher, who used to have a cannon for a leg, fell off considerably this season. Brett Kern has also settled into the middle ranks.

Johnny Hekker fails to live up to his all-pro reputation, but is still a top ten name. He mostly suffers from some inopportune touchbacks and a couple of short field shanks, though, his power only ranks 4th.

Jeff Locke had a below average leg, and probably will never overcome that. But his short field accuracy improved dramatically before being replaced by Sam Martin, who turned in arguably the worst punting performance of the year.

Elsewhere in news of people who replaced Jeff Locke, Ryan Quigley did little to improve upon his shaky season in Arizona in 2016. PFF has him graded 7th, however, which indicates that some extra thought is necessary. The Vikings benefitted from a league-leading number of fair catches, so perhaps the addition of (currently unavailable) hangtime data would shine a favorable light on Quigley.

Riley Dixon is a fascinating case – he has the weakest leg in football, but the most accurate one by a huge margin. The sand wedge of NFL punters.

Conversely, Drew Kaser got the title of “strongest leg” with 52.66 yards per long field punt, but fell away a bit in the short accuracy. Chargers fans should still be pleased.

The Packers continue to struggle to find their man, as their newest rookie Justin Vogel struggled as much as Jake Schum before him, or Tim Masthay before that.

Andy Lee continues to play at a high level, despite last year’s injury. A regression from 2016’s immense performance was probably going to happen naturally anyways, so Cardinals fans should be thrilled, especially considering the circus they had at the position last season.

Punters are constantly misevaluated by national media, mostly because the national media treats it as a tertiary and unimportant position. But properly parsing punt distance alone can lead to new insights and greater wisdom.